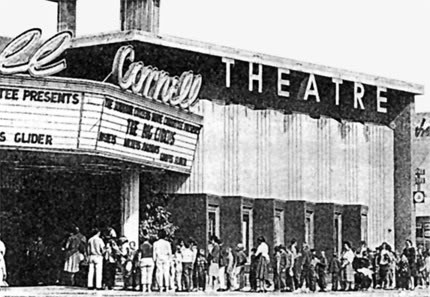 The Cornell Theatre was opened on November 18, 1949 and had two main aisles that ran down the theatre. The theater was perhaps best known for its neon-laden marquee with the words ‘Cornell’ scrawled across it.

Inside the auditorium, all seating was on a single level. There were Art Deco style ‘swirls’ on the side-walls and on each side of the proscenium. The curved ceiling contained ‘twinkling star’ lights, giving a semi-Atmospheric style to the decoration.

The Cornell Theatre was demolished in 1980 after closing in 1978.

I am looking for a Bill Darnell that use to hang out there in 1968-69. He rode a motorcycle and knew Dona Fleming.

That was me in NJ. I saw Josey and Chino at the Cornell. There was a pretty good size crowd that night. My parents and I were driving around the country in August of 1976. We stayed at a motel closeby (almost across the street) and we had a free evening so we took in two of our favorite actors. I have the ticket stubs to this day. I can’t believe it’s so long ago. I was sad to see a K-mart or something like that in its place. Double features were common then at the 2nd run theaters. What a way to catch up on movies! I hope you enjoyed the Wiltern. I’m sorry we didn’t get to go there as I know it’s a beautiful building.

Just to give a better idea of exactly where this was, you can see the sign in the background here: http://wesclark.com/burbank/san_fern_rd_zodys.jpg

The Zody’s in the foreground is now K-Mart. The Cornell is two blocks away at, not surprisingly, Cornell Street.

@Socie71…Do you have any prints that I could buy? I also have many memories of this grand theater…please advise:

WOW! This is a serious memory blast. To those who found this site, we are blessed. I’m not sure how one simple thought can trigger another, then another. The Internet of course changes everything. Thinking of the Cornell Movie Theater is like going back to another era of time. Only yesterday I was researching the ultimate bad guy, actor William Smith. IMDB him. He was in a movie about bikers and there was this hot woman. This was a powerful moment for a kid.

A movie on Saturday for $0.50…that’s two quarters! I remember how disappointed I was when movies were $0.75. This was unacceptable. Seriously…what is wrong with the world! I was about 12.

Billy Jack, Willy Wonka, and Jaws blew me away. I can remember where I sat when the head in Jaws rolled out. That freaked everyone out. Going home after Billy Jack with my friend Tony and fighting in his backyard like we were in the movie. A scene in Billy Jack where I laughed and everyone of my friends thought that was inappropriate. How awkward I felt. How I always wondered what was going on for me at that time. All these memories triggered because of this theater.

When the Cornell closed Burbank had five movie studios and no movie theaters. How ironic is that!

I would have seen a lot of movies here in the early to mid 60s—but the only one I can remember is “Journey to the Seventh Planet”—probably because it scared the cheese out of me. I’ll bet I sat thru it more than once. Good times.

Anyone know of a Burbank movie theater in about 1957 that had plush chairs that rocked and had a crying room?

I am trippin', just came across this site and wow…have so many good memories of the cornell theatre! I worked there for a couple of years1969-1970ish. As a box office/ candy girl with non other than the famous Rene Russo! Yes..she worked there and hung out with everyone…joe lankau, Anthony (something)…and others I cannot think of at the moment. The manager at that time was in his early 80’s I think? Cannot remember his name either. Anyway was very sad about 10 years ago when I discovered it was torn down…..they should keep buildings like that alive! We need the charm!

The Cornell and the Magnolia can be seen in the 1975 Gene Hackman film “Night Moves,” between 8 and 11 minutes into the film. The Cornell is just glimpsed briefly in a drive-by, but a whole scene is played out in front of the Magnolia.