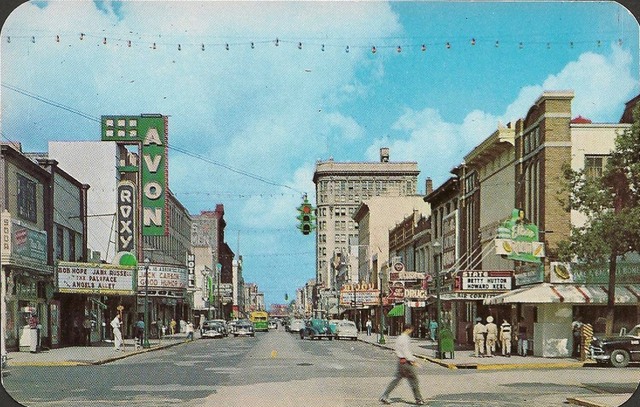 Another theater in Savannah with the auditorium across the lane in the back(now a parking lot).

The opening of the Bijou was noted in the January 8, 1910 issue of The New York Dramatic Mirror:

“SAVANNAH.—BIJOU R. G. Herndon, mgr.) : The new Bijou was auspiciously opened Dec. 25 with a presentation of When We Were Twenty-One: the new theatre is modern in every respect and the management has taken pains to look after every comfort of patrons: the decorations both interior and exterior are very handsome : there are two entrances, one on Broughton and one on Congress street; for the present Schiller’s Stock co. will present standard plays at popular prices.”

The Bijou was listed in the 1912-1913 Cahn guide, and in the 1914-1915 American Motion Picture Directory. Over the years it served as a legitimate theater, a movie house and a vaudeville theater, and was for a time part of the B. F.Keith circuit.

Given the name Bijou it’s possible that the house was originally built for Jake Wells' Bijou circuit, as Wells was planning to build a new theater in Savannah in 1909, according to the June 10 issue of Manufacturers' Record.