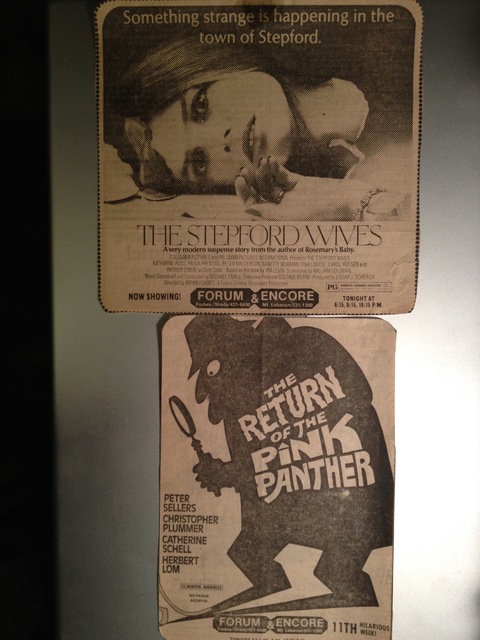 The Forum Theater opened July 17, 1963 with Margaret Rutherford in “The Mouse on the Moon”. It closed December 8, 1978 with “Cat and Mouse”. It sat on the corner of Shady Avenue and Forbes Avenue in the Squirrel Hill section of Pittsburgh.

Maybe someone like Ron can help you out. You can look up his post on Cinema Treasures, I know one is under old theatres in Pittsburgh.
Norelco

I was just up in Squirrel Hill last night. Ben and Jerry’s Ice Cream sits on the site. The front of the building does not resemble a theater, but if you go around back and look at the back of the building, you can see some interesting Greek style designs on the building.

The Forum was very light beige and white decor in the auditorium. Lots of statues of Roman warriors were there, too. The curtain did not part in the center. It traveled from left to right instead!? The entrance to the projection booth was directly into a private door off the parking lot behind the theater. Many shifts there, I saw nobody. Of course, running across the street for a snack between changeovers could be accomplished quite easily. Lawn chairs on the sidewalk contributed to a festive working atmosphere. Ah, the good old days. I remember “A Funny Thing Happened On The Way to The Forum” playing there.

The Pittsburgh-based Associated Theatres circuit opened the elegant 373-seat Forum (often spelled Forvm in advertising) in the early summer of 1963 in the Squirrel Hill neighborhood, hub of the city’s art houses.

Its manager was one of the proudest and friendliest in the local film business, the dimuitive Bill Scott.

A distinctive feature of the theater is that the screen’s wall was against the sidewalk on Forbes Avenue. One entered the theater beside the screen and walked along a corridor to the left of the auditorium to reach the concession stand and the entrance to the auditorium.

A big hit from the first week, the Forum started with a seven-week run of “Mouse on the Moon” and soon played the exclusive first-run engagement of “Lilies of the Field” for 24 weeks. It ran “Dr. Strangelove” for 10,“ a re-release of "Lili” for eight, “Marriage, Italian Style” for 16 and “Zorba the Greek” for 13.

Associated was having such success with choice bookings for its little jewel that it built a companion for the Forum about 15 miles away in a southwestern suburb of Pittsburgh called Mt. Lebanon.

The Encore opened in the summer of 1965 and joined the Forum in presenting a spy spoof called “Agent 8 ¾,” which had been known in England as “Hot Enough for June.”

The film did not do well, but “Casanova ‘70” quickly became the first joint Forum/Encore hit, followed soon by “A Patch of Blue,” which lasted 16 weeks, and “To Sir, With Love,” which lasted 19.

All records then were broken during the 25-week run of “The Graduate.”

When the two theaters played the same film, the Forum consistently did better than the Encore by taking in 60-70 percent of the earnings.

After a three-week run of “Cat and Mouse,” the Forum closed in mid-December 1978.

The site has been used for a bagel shop and two different ice cream emporiums since. The structure is that of the theater, albeit barely identifiable as such.

If the site is where the Ben & Jerry’s/Bagel Factory is now then the address should be 5885 Forbes Ave, Pittsburgh, PA 15217

Final day of operation was December 8, 1978 with, as mentioned above, “Cat and Mouse”