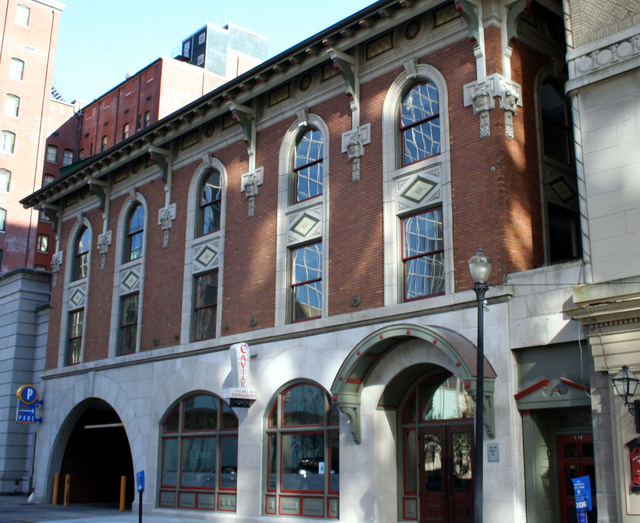 The Walnut Street Theatre opened in Louisville on August 29, 1910 as a vaudeville house. The theatre was strongly believed to be one of the early vaudeville houses designed by John Eberson. Research of records indicate that he was the architect along with the firm of McDonald and Dodd. The theatre is described as composed of brick with decorative ornament in stone and colored tile or polychromatic terracotta. The building is a three story structure of eclectic style. Classical and arts and crafts motifs are both present in the facade.

The theatre changed hands several times as after vaudeville houses became less popular. In 1942 it became know as the Scoop Theatre and at first showed only newsreels. A broadcasting studio was set up on the first floor which broadcast news into the theatre. The canopy was replaced by a more standard marquee.

The building is currently undergoing a renovation to restore the first floor facade to be more in line with the orginal design. There is also windows being added down the side so light can reach the offices. The building has a tunnel through part of the first floor which is used by cars to reach a parking structure behind the building. This adaption was a creative way of keeping the building from the wrecking ball.

The building was listed on the National Register on Historic Places in 1978.

The Walnut Street Theatre was renovated and re-named the Drury Lane Theatre in 1933. In use as a live theatre, the opening production was “Candle Light” by P.G.Woodhouse performed by a new stock company.

My mother’s step sister/mother was a singer in vaudeville in Louisville in the 20’s. Are there any records for entertainers that appeared there? She was Galena Wade/Piemontesse/other. She was very young and I do have a picture of her on stage of some theater. My grandfather and grandmother also might have been in the theater as musicians: Oreste Natiello and Pauline (Winscott) Hamlin.

My father, Lloyd M. Mills, was the Scoop Theater manager from 1949 to 1953. During this time the theater was plagued by an ongoing strike. The Scoop was the scene of frequent vandalism during this period including the release of several stench bombings. By 1953 the cumulative effect of these attacks lead to a drop off in attendance and the Scoop closed. During this time the Scoop was an “Art” theater playing many foreign films plus a few older American movies. I have many fond memories of this period and the many films that I saw there as a grade school and high school (Flaget) student.

According to a Courier-Journal story, the Scoop was closed in the late 1940s and converted to convention space for the nearby Brown Hotel.

Here are some photos on a real estate site. I think the renovations are finished.
http://tinyurl.com/6l7kkz

Trade journal The Moving Picture World for August 2, 1913, had this to say about the conversion of the Walnut Theatre into a movie house:

“The Walnut Theater, Louisville, will shortly open as a moving picture theater, according to a recent announcement. The Gus Sun Theatrical Company, of Cincinnati, is the power behind the project, it is said. Twenty-five and fifty cents will be the fees, and the way In which this announcement is received by the Louisville public will be watched with a good deal of interest by exhibitors and others interested in the business. It is the plan of the Sun people to show only high class feature films, running from five to seven reels in length. This also is an Innovation in Louisville. Whether the public prefers the lengthy subjects to the short single reels has been a subject of discussion among exhibitors for some time, and the reception accorded the Walnut policy will be noted carefully. Women as ushers, cashiers, ticket-takers and other employees will be a feature, and about the only man around the theater will be the manager. The attaches will be attired in natty uniforms.”

The University of Louisville’s collection of digitized photos includes two depicting this house as the Scoop Theatre.

Here is a closer view from the same period.

Here’s another mention of the Walnut Street Theater from The Moving Picture World, this time May 15, 1915:

TOUGHS RIOT IN LOBBY Louisville’s Walnut Street Theatre Employees have Tussle with Gang of Roughs Who Attempt to Get in Without Payment – Assistant Operator Shot in the Leg Trying to Wrest Revolver from Gangster Who Had Fired at Him.

The Walnut theater, on Walnut street, between Forth and Fifth, got into the limelight when a gang of young toughs undertook to pass the doorkeeper without paying at the box office. The trouble occurred on Sunday night, April 25 (1915, ed.) According to employees of the theater a number of boys appeared in the lobby and made themselves disagreeable. They were ordered off the premises, but later returned with a gang which claimed that it was going to clean out the theater. The doorkeeper and two or three other employees called for police aid, but before the latter could arrive the trouble started. The employees of the theater were forced to chase the gang out, and some of the latter who happened to be armed started shooting as soon as an alley was reached. A bullet passed through the clothing of Thomas Newman, one of the theater employees. Leroy Nichols, 15 years old, opened fire on Whiteford Volles, 17 years old, assistant operator at the Walnut. Four shots failed to take effect, and Volles grappled with the boy doing the shooting. In the scrap that ensued Nichols discharged the gun into his own leg, and was removed to a drug store and later to the hospital. The police at last arrived and captured a few of the youngsters, who were taken to the Juvenile Court on Monday. Very few of the patrons of the theater became aware of the disturbance, although it caused a good deal of excitement on the streets. Trouble has been experience on one of the two occasions at the suburban theaters by young hoodlums, but his is one of the first cases in the downtown district.

I wonder what the auditorium space is used for now, it’s clearly all there but doesn’t appear to be used for the restaurant.