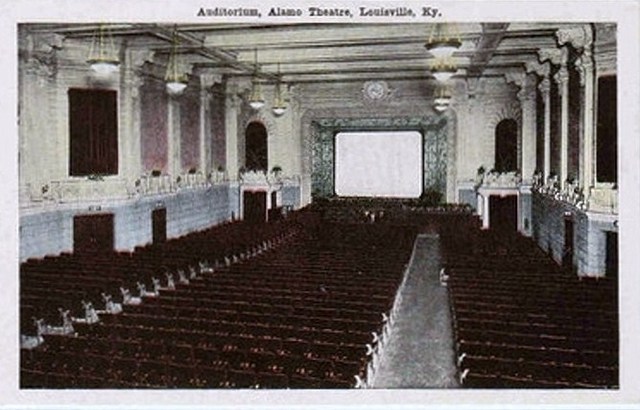 The Alamo Theater opened in November 1914. It was still operating into the early-1930’s as the Ohio Theatre. It was demolished in 1940.

Marilyn Dee Casto’s book “Actors, Audiences, and Historic Theatres of Kentucky” says that the Alamo Theatre was designed by Louisville architect D.X. Murphy. However, the Arcadia Publishing Company’s picture book Louisville, by John E. Findling, attributes the design of the Alamo to Joseph D. Baldez, an associate of the firm of D.X. Murphy & Brothers. As Casto’s book is published by the University Press of Kentucky, it might be more reliable, though an academic imprimatur is not always a guarantee of accuracy.

Dennis Xavier Murphy took over the practice of Henry Whitestone in 1880, and by the time the Alamo was designed he had formed the partnership with his brothers . The firm designed a number of important Louisville landmarks, including the twin-spired clubhouse at the Churchill Downs race track. I’ve found several sources which attribute the clubhouse as well to Joseph Baldez, then a 24-year old draftsman with the firm.

Casto’s book also says that Murphy designed the conversion of an existing building in Louisville into a theater for the Whallen Brothers, local vaudeville and burlesque impresarios, but doesn’t give the name of the theater or the year it opened.