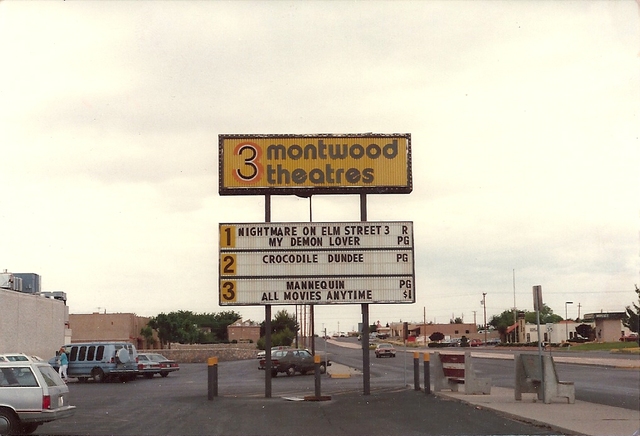 This theatre was built and opened by Cinemas Southwest Theatres in September 5, 1975, located inside Montwood Mall. It was bought out of bankruptcy by the late Bob Garner of Movie One Theatres of El Paso.

I managed this theatre from 1984 to 1993. We added four additional auditoriums and expanded the lobby, concession and restroom facilities on July 17, 1987. The renovation boasted flashing neon behind glass brick walls, sequential lighting all the way down the “magic tunnel” to the new auditoriums, and lots of brass, including the ceiling panels in the lobby.

It was closed on March 17, 2020 due to the Covid-19 pandemic. The closure proved to be permanent.

HELLO JIM MILLER THERE NOW A SITE ON FACEBOOK FOR SUPER SAVER CINEMAS THEATERS, PLUS COME AND JOIN US MY NAME IS DENNIS MAHANEY WAS A DIVISION MANAGER FOR BOB IN DENVER AND CA. NOW RETIRED IN ABQ.N.M.

and expanded to 7 screens on July 17th, 1987. Grand opening ad in the photo section.

It did close permanently (in addition to being removed from website, its content has been removed from Facebook and its phones are disconnected). Sadly, virtually every discount cinema that was still operating prior to COVID-19 has been permanently closed.

Wow! You are really good at this! I hope you could get some photos and updates on theaters in my state (New Mexico) soon!

Thanks much! BTW: The Montwood was also part of the Silver Cinemas Circuit as Montwood Movies 7 with $1 movies and even $1 concessions for a period. They got it when Movies One went bankrupt. Silver closed up in January of 2003. Interstate Theatres took on the venue after Silver on on March 12, 2004 with $1.75 / $1.25 discount, sub-run pricing. It also took on the East Pointe 12 with a slightly more expensive sub-run $2 policy ($1 on Tuesdays).

On December 8, 2006, the same company now was doing business as Starplex Theatres Montwood Movies 7 and also rebranded its East Pointe slightly, as well. Starplex would close the Montwood Movies 7 on June 19, 2007. Premiere Cinemas then took on the operation giving it a major refresh. It relaunched with an invitation-only relaunch on November 15, 2007 and a grand opening on November 16, 2007.

Premiere mad a name change but continued the discount house to March 16, 2000 when Premiere closed this and all of its locations for COVID-19. But the discount houses had no product when theaters reopened and most, including the Premiere Montwood Movies 7.

And this wasn’t ever associated with Premier Theaters. It never had the Premier in its name (just Premiere) and was part of the Premiere Cinemas Circuit.

I’ve been told that ever since Premier closed this theater permanently, the theater space is getting remold and just going to be more stores

It wasn’t because of Silver Cinema’s bankruptcy that Montwood and East Pointe was sold. Starplex approached Silver and wanted the two locations. We were shocked Silver let the theatres go. We were putting money in the Montwood fixing up the concessions stand and putting on cup holder armrests.