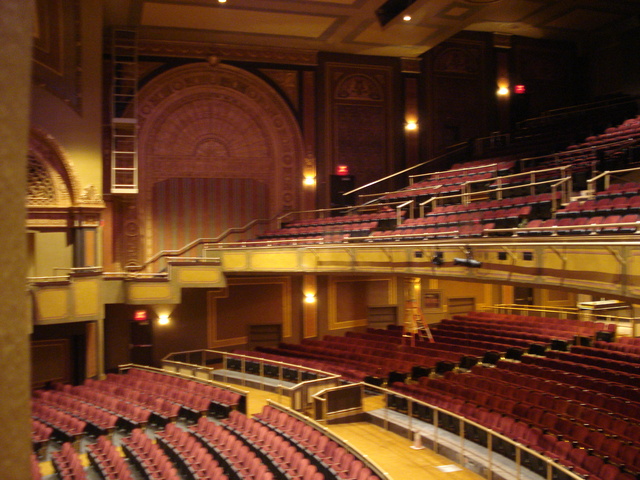 Keeney’s Theatre opened December 21, 1925 as a vaudeville and silent movie theatre, the opening movie was Cecil B. DeMille’s “The Ten Commandments” starring Theodore Roberts. At that time it had 2,600 seats with 1,400 in the orchestra and 1,200 in the balcony. It was equipped with a Marr & Colton 4 manual 20 ranks organ which was opened by organist S.L. Stambaugh of Chicago. By 1941 it was operated by Warner Bros. Circuit Management Corp. and had 2,362 seats.

It was remodeled in around 1953 for the Dipson chain by architect Michael J. DeAngelis, and was known as the Elmira Theatre.

When this palace closed as a movie house, it was called the Elmira Theatre and was run by the Dipson chain. They replaced it with the Elmira 1-2-3, which opened in 1977 a block away on College St, now closed. The street in front of the original theater was widened, thus the building lost its lobby building and back part of the auditorium. A new front was placed over the wound, and the house reopened as the Clemens Center. The street was renamed Clemens Center Parkway. Entrance is now at the left of the building.

According to Cinema Tour the Elmira Theatre architect was Michael J. Deangelis and the address was 111 College. The Elmira was remodeled around 1953 to accommodate a CinemaScope screen and new seats. If the Clemens was also known as the Elmira and the Keeney’s, then I wonder why it gives different addresses? I would love to see an exterior photo of the Clemens Center.

I just viewed an artist rendering of the Clemens Center and it can’t be what was called the Elmira Theatre at 111 College.

Well, that is quite the photo and is certainly the Elmira Theater, the theater in question for so many of us! The 1950’s downtown Elmira map is neat to view, too. Thanks so very very much!

The latest photo is of the front of the building. The demolished the original lobby building, and cut off the very back part of the auditorium. The photo above is the new front that was put on it. The Elmira 1-2-3 on College St. is not this theater. It is a completely separate building that opened about a block away in the 1977.

This reopened as the Elmira theatre on September 26th, 1952. Grand opening ad in the photo section.

When the December 20, 1924 issue of Moving Picture World announced that bids were about to be taken for construction of what was then to have been called the State Theatre, it said that the architect for the project was Leon H. Lempert. Frank Keeney took a long-term lease on the house before it was completed and opened it under his own name.