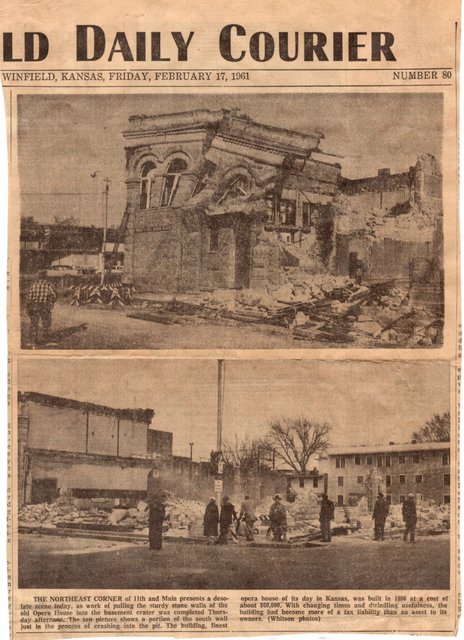 The Regent Theatre was located in Winfield’s former Grand Opera House, which opened in 1887. It was demolished in February 1961.

O.F. Sullivan, Wichita theaterman, has leased the Regent Theater in Winfield, Kas. Remodeling plans are under discussion. The Regent is a 750-seat house.

Boxoffice magazine reported in May 1960 that O.F. Sullivan was closing the Regent and that the seats and equipment were being removed from the building.

The description at the top says that this theater was located in the city’s Opera House. There is a Winfield Grand Opera House listed under Winfield KS in the 1897-98 edition of the Julius Cahn Official Theatrical Guide. Unfortunately, the listings in this Guide do not include street addresses. The opera house was located on the ground floor; the proscenium opening was 33 feet wide X 20 feet high, and the stage was 30 feet deep. Gas illumination was used, and the Mgr. was T.B. Myers. It supposedly had 1,000 seats. The 1897 population of Winfield was 7,000. I don’t know if this is the theater which later became the Regent.

Compare the photos from the first post (ken mc) and the post by Chuck1231. This is not the Regent this theatre the Fox House. From the pictures in the first post by ken mc, you will notice that the Regent is located at the end of the block, while the Fox is across the street and in the middle of the block.
Also the Winfield Cinema sign is identical to the Fox sign and the marquee panels at some point were changed out and replaced with plastic ‘Winfield Cinema 1 &2."

From the 1950s a photo postcard view of the Regnet Theatre in Winfield.

This page should be titled Regent Theatre, with the aka Winfield Grand Opera House. There is already another Cinema Treasures page for the Winfield Cinema, under its earlier name of Fox Theatre. It has the correct address. The address on this page is for the Regent Theatre, aka Winfield Grand Opera House (as listed in Julius Cahn’s Theatrical Guide), but several of the comments after the first five about the Fox/Winfield Cinema.

Here is a page with several photos of the Regent Theatre (click on the thumbnails) including a number of interior shots. The Opera House was opened in 1887, and was designed in the Romanesque Revival style by local architect Willis A. Ritchie.

Here is a large web page about Willis Ritchie, with contemporary news articles about his projects an numerous photos of various buildings he designed.

I’ve found that, after a number of years practicing in Winfield, and not long after designing the Opera House, architect Willis Ritchie moved to the state of Washington, settling in Spokane in 1892. There he became one of the most successful architects in the Northwest, designing buildings throughout the region, from Vancouver, Washington, to Anaconda, Montana, as well as the Washington State Building at the 1893 World’s Columbian Exposition in Chicago.

The Regent Theatre DOES NOT still stand. It’s address was 1022 Main St. It was torn down in February of 1961.

Boxoffice, Aug. 17, 1957: “The Regent in Winfield, Kas., closed recently by O. L. Sullivan, has been taken over by Fred Munson who operates the Winfield Drive-In there, as well as the 166 Drive-In at Arkansas City and the Scott City Drive-In”

Maybe this sale didn’t take? The Exhibitor, April 28, 1954: “The Regent and Nile, Winfield, Kans., have been purchased by Ray Winch from O. F. Sullivan.”