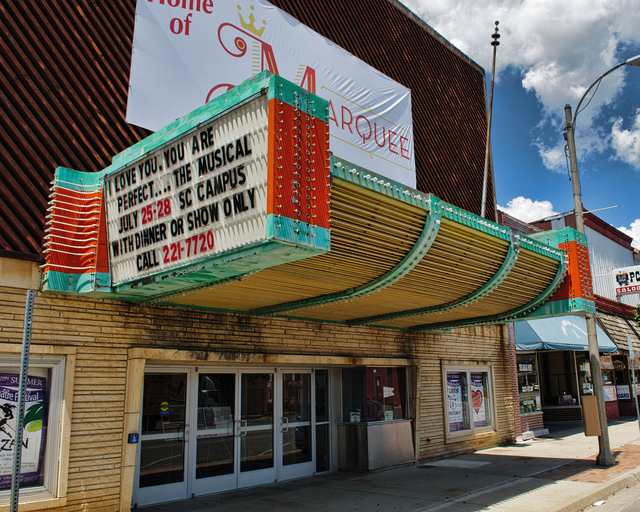 The Fox Theatre was opened in 1950, and was located across the street from the Regent Theatre (former Winfield Grand Opera House).

By the mid-1980’s it had been twinned and renamed Winfield Cinema I & II.

Here is a photo. Click on the theater for a closeup:
http://tinyurl.com/ku2g7

Unsure when it was torn down, but an appliance store is there now. Was Sears at one time. Building that is there now definitely does not match the rest of the block.

From August 2010 a this photo seems to indicate that the Fox Theatre building may not have been demolished. And that butt ugly false facade my be hiding most of a classic theater building.

Boxoffice included the Fox in Winfield on its list of theaters opened in 1950. I’m not sure if a theater had previously operated in this building under another name, or if the structure was new or was converted from some other use.

The entry for architect Samuel W. Bihr, Jr. in the 1956 edition of the AIA’s American Architects Directory lists the Fox Theatre at Winfield, Kansas, among his works. It gives the year of the Fox project as 1952.

Addendum: As Boxoffice ran a photo of the theater in 1950 (second photo at the top of this page) I’m not sure if the AIA Directory got the year wrong, or if Bihr’s project was only for some sort of alteration to the theater. He was apparently a contract architect for Fox Midwest for a number of years, handling many projects both large and small.

It is now being converted into performing arts center.