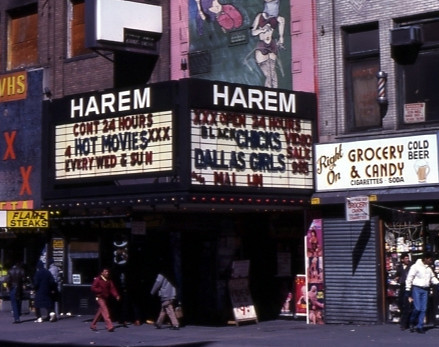 The Harem Theatre was closed sometime in 1995-96, when just about the entire north side of W. 42nd Street from 8th Avenue to the Selwyn Building was condemned and taken by the City through eminent domain for redevelopment. In 1997 the theatre and adjacent buildings were demolished to make way for a high-rise Westin Hotel and the 13-screen Loews 42nd Street E-Walk that opened in 1999 and is now run by the Regal Entertainment Group.

Thank You for the EXCELLENT pics of the Harem Theater. During the summer of 1984 I was homeless in Manhattan and I used to pay $5.00 in the afternoon at the Harem to get in and I would stay all night until they kicked us out at 6:00 am. I have fond memories of the place and I miss the old Times Square area.
Mark Montgomery .com

Hey thanks for the 1996 pic, it was a bit of a chore to copy it but I got it. Mark Montgomery

This was another Harem in the early seventies. Address was 723 Eighth Avenue.
http://tinyurl.com/puy6ag

Hello fellas. Thanks for putting together these memories. Wish some more of the girls woul find their way here. Love to all, Annette

Ok, here’s some live footage of the Harem and some of the other theaters on 42nd St that my friend and I shot back in September 1980. http://www.youtube.com/watch?v=qbRVzD71Cno this is part of a longer film, my friend did the music. By the way, my partner and I are currently doing a documentary on the Deuce, and we are very, very interested in interviewing anyone who worked on that street, in particular projectionist, but really anyone who was there in the golden days. We’ve already interviewed Jamie Gillis (male porn star who did live sex shows on the deuce), Joel M. Reed (who directed Bloodsucking Freaks aka Incredible Torture Show) and in January we are interviewing Carter Stevens (Adult Film director) Contact me if you have a story to tell.