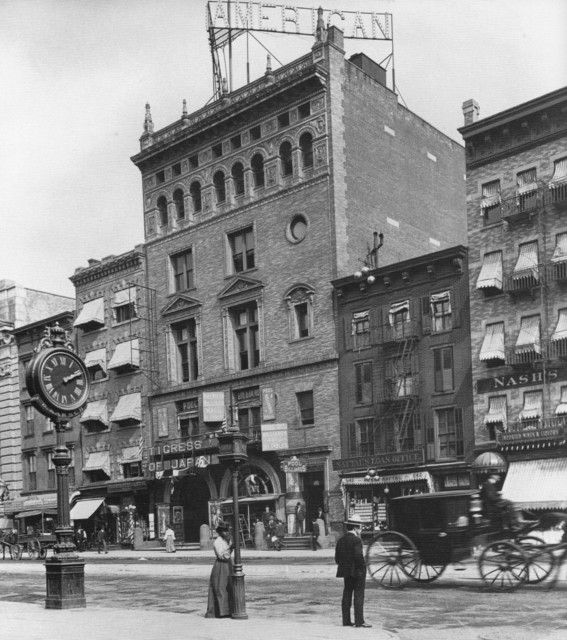 Built for theatrical manager T. Henry French on 8th Avenue between W. 41st Street and W. 42nd Street in 1892-3 by architect Charles Coolidge Haight, the American Theatre at the time featured one of the largest seating capacities in New York, with almost 2,070 seats, not including the rooftop garden theatre.

Though its W. 42nd Street entrance was rather small and simple, the main entrance and facade on W. 41st Street was just the opposite, towering and highly ornate. It resembled a Neo-Italian Renaissance palazzo, with red brickwork with white terra-cotta trim, including three sets of two-story high windows above the triple doorways of the main entrance, and a row of arched and terra-cotta lined windows just below the cornice.

Its auditorium, however, was fairly plain, a Victorian music hall with minimal decoration, and, unfortunately, six columns supporting each balcony, which obstructed the views of many theatre-goers, much to their frustration.

The American Theatre opened in May of 1893 with a long-running hit, however, “The Prodigal Daughter”, produced by French himself, but after this show’s run, a run of flops followed, and in 1897, the theater was sold to another manager, and then another, and so on, until 1908, when William Morris changed the theater’s name to the American Music Hall, and began staging vaudeville acts. That same year, Morris hired Thomas W. Lamb to convert the open-air rooftop theater into an indoor second auditorium, seating another 1,400. Lamb decorated the new auditorium in semi-Atmospheric style, with twinkling “stars” on the blue ceiling, and forest scenes decorating the side walls. However, despite its charming decor, the new auditorium never caught on with the public, and the American Music Hall languished for a couple years, until Morris sold it to Marcus Loew in 1912, and it was renamed Loew’s American Theatre.

After Loew’s took over, both auditoriums were switched over to vaudeville, stage revues and movies. Loew’s closed the American Theatre in 1929, and shortly thereafter it was announced the former theater would be torn down and replaced with a large office tower. However, due to the Depression, this plan never came to fruition, and instead, the theater was reopened for burlesque acts for another year. In 1930, a disastrous fire destroyed a large portion of the American Theatre, but the 8th Avenue side of the building, which mostly held offices, was converted into bachelor apartments, but within a couple years, this section was also demolished, and the site used for circus’s for many years.

However, for the past half century, the site was used as a parking lot. In the mid-2000’s the 11 Times Square office building was built on an expanded site.

The old American Theatre is listed in the 1897-98 edition of Julius Cahn’s Official Theatrical Guide, an annual reference for roadshow managers. The seating capacity is: Orchestra: 671, Balcony: 593, Gallery: 800, Total: 2,064 seats. Ticket prices ranged from 25 cents to $1.50. The proscenium opening was 38 feet wide x 39 feet high. The stage was 58 feet deep. The theatre was on the ground floor and had both electric and gas illumination. There were 15 members of the house orchestra.

The office tower is being built on spec as there are no committed tenants as yet. Construction has commenced and, when completed, the tower will have 1,000,000 square feet and is expected to cost about one billion dollars. The New York Times tower across the street on 8th Avenue btn 40th and 41st has leased extremely well at very high rates. It’s too bad that a legit theater has not been included as part of the development; especially considering the history of the site and the area. The new Bank of America tower on W. 43rd St. will include a new Broadway legit theater in its base. The new Henry Miller Theater is expected to open late in 2008.

Marcus Loew had it going on.So did his buddy William Morris.

Too bad no photos.

Hello- while quite fascinating and beautifully designed Mary C. Henderson’s book “42 Street” contains a big factual error that i’m surprised the proof reader didn’t catch. the book is a biography if you will of the 12 theaters that were built on 42 St. between 7t hand 8th Avenue. the twelve chapters are arranged chronologically by the date the theater was built. therefore the American is the 1st theater discussed and therein lies the factual error. the chapter begins with i believe this statement-“the American has the dubious distinction of being the first theater built on the block and the first theater torn down”. this is not true. while it was the first theater built it was not the first theater torn down. Hammerstein’s Victoria right on the northwest corner of 7th Avenue and 42 St. was torn down at the end of 1915. the American wasn’t torn down till 1931.

Bigjoe59, Mary C. Henderson considers the Rialto as an incarnation of the Hammerstein Victoria since the building itself was not demolished.

I’ll give you a factual error… The street view, above, points to the wrong side of 42nd Street. Swing that view around to the left to see the old American Theatre site, where the new NY Times tower has been constructed and now adjacent to the relocated shell of the Empire Theatre. The introductory comments should also be updated to reflect that the northern half of the Times building now stands on the site of the American.

That is actually 11 Times Square, Ed. The NY Times Tower is one block south.

as always i thank my fellow posters for their replies. while “42 Street” is one of my favorite books about Manhattan theater history the opening statement to the chapter on the American has always perplexed me. now the Rialto of 1916 is the movie theater which “replaced” Hammerstein’s Victoria. since i’ve read the Rialto was the first movie “palace” built in the Times Square area i assumed it was a brand new from scratch building but apparently not according to Henderson. so how much of the Victoria existed in the Rialto? for instance was the Rialto simply built within the gutted frame of the Victoria so all that was left were the four walls?

also considering Henderson’s thoughts on the subject how much of a older structure would have to still be present for the “new” theater not to be considered a “new” theater as she does?

Yep. My mistake, Al. So much new construction in the area, and so little character and identity to distinguish one tower from the next.