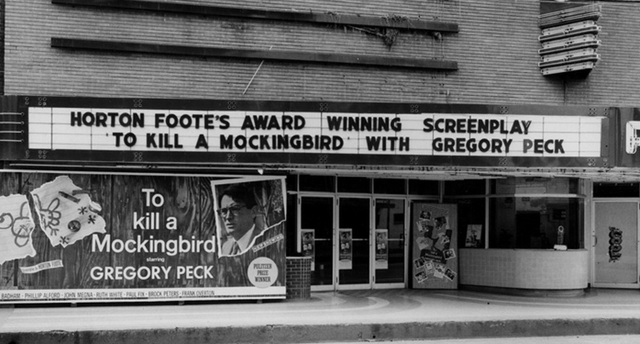 The Rio Theatre was a majestic brick building located just west of downtown Wharton, Texas. Opened on August 13, 1950, this building replaced the original Rio Theatre which had opened in 1935.

The exterior had a large vertical, wall-mounted sign bearing the theater’s name and a broad, burgundy-colored marquee with real milkglass. The neon on the marquee and the vertical sign glowed a mystic pink! The terrazzo floor outside the lobby was a seafoam green with two pink lines that curved towards the lobby.

The Rio Theatre was known as the home of the stars, and it was a favorite hangout of Wharton teens in the 1950’s, 1960’s, and early-1970’s. During these years the theatre was operated by the Frels Theatres chain, out of Victoria, Texas. The manager in the late 1960’s-early 1970’s was Mae Jensen. The Rio Theatre would show a children’s movie on Saturday mornings. Among the movies that made their Wharton debut at the Rio Theatre were “Old Yeller”, “Love Story”, “Shaft”, and “Butch Cassidy and the Sundance Kid”.

Bob, the track used in “Two Boys” crossed N. Alabama Rd. The tracks ran along side Santa Fe Street. The view was to the north and the train was moving eastward. I don’t know if the train was a Santa Fe. BTW, I worked for Mae Jensen at the Rio back in ‘69-'70 for a while.

Picture of the Rio when “To Kill a Mockingbird” was playing there: View link

The Rio opened at 6:00 p.m. on August 13, 1950. The premier feature was, fittingly enough, “Nancy Goes to Rio” with Ann Sothern and Jane Powell. The Rio’s general contractor was James Kershaw, and C. Russell Lewis of Dallas, Texas supervised the artistic decorations.

Are there any surviving photos of the Rio’s interior? There were bas-reliefs in the lobby and auditorium when the Rio was new. Did these survive a 1967 interior remodel? Does anyone know?

Judging from the photo of the facade that CWalczak linked to above, this 1950 theater was not Spanish Renneissance in style, but thoroughly modern. Maybe it was the original Rio that was Spanish.

The last movie to show at the Rio before it closed was “Los Hombres No Lloran” with Jorge Rivero and Lorena Velazquez. That was on June 15, 1975.

I was the general manager of the Rio Theatre in Wharton from summer 1972 untl June of 1975. I also managed the Plaza Theatre at the same time. It was during this period that the Plaza went through a major conversion from a one screen theatre into a three screen unit. When the Plaza opened as a three screen unit in June of 1973, the Rio was converted into a “R” rated theatre and remained so up until I left in June of 1975. I have pictures of the Plaza grand reopening that I will try and find and post. I remember we opened the Plaza with “American Graffiti”, but I cannot remember the other two features.

I found the opening day information for the original 1935 Rio. It opened on Easter Sunday, April 21, 1935. The premier feature was “It Happened One Night” with Clark Gable and Claudette Colbert. The original Rio was located in the Vineyard Building on the corner of Milam Street and Richmond Road. That building was demolished in December 1991.

sepiatoone you might want to create a page for the original Rio.

I remember when you opened the Plaza back in 72', before the conversion. I remember seeing “What’s up Doc” with Barbara Streisand and Ryan O'Neal. I also saw “The Cockeyed Cowboys of Calico County”, with Dan Blocker. And also lived across the hall from you for several months. I remember you were a true fan of Ray Price. Your post brings back memories. About that conversion, did you extend the balcony and put two smaller screens up there? That is how they converted the River Oaks Theater in Houston from one screen to three. ~ken