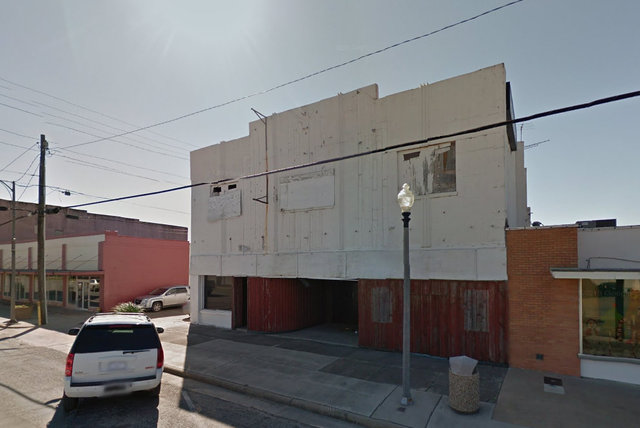 The Normana Theater was one of three theaters in El Campo. It was opened in 1925, and was designed by architect Ernest L. Shult. After at least 40 years in operation, it was closed when the Showplace 3, El Campo’s current indoor theatre, opened circa 1984. The building has been donated to the El Campo Community Theater. The group is working to renovate the old theater for live theater performances. (See related Theaters in need posting–3/25/04).

First, the theatre was named the Normana (one N only) after Norma Ana Frels. It was in the Frels theatre chain. The original bulb sign still exists to this day in a warehouse of Frels Pipe Organ Co. in Victoria, TX. The original Normana theatre was located in Cuero, TX. At one point during the operation of this theatre, Rubin Frels converted it into a 3 plex, with each balcony being a seperate theatre, similar to what he did with the Plaza theatre in Wharton, TX.

One source cites the Liberty Theater in El Campo as being currently occupied by an antiques store. Googling produces Prairie Switch Antiques at 708 N. Mechanic Street. Either Liberty was an aka for the Normanna or alternatively the theaters were adjacent.

I’ve updated the address. The Normana is at approximately 160 N. Mechanic Street. The link above should show the street view of the theatre.

The Normana Theatre at El Campo was in operation at least as early as 1933. It was mentioned as having been open then in a 1940 Boxoffice article about an antitrust suit.

Brad Richards says in the first comment above that the first Normana Theatre was the one in Cuero, Texas. That theater was sold by Rubin Frels in 1930 and was renamed the Rialto by its new owners, the Hall circuit.

No mention was made of another Normana Theatre in any of the 1928-1930 trade publication items about the first Normana, so it seems likely that the El Campo house was opened between the time the Cuero Normana was sold in 1930 and the 1933 events cited in the 1940 Boxoffice item.