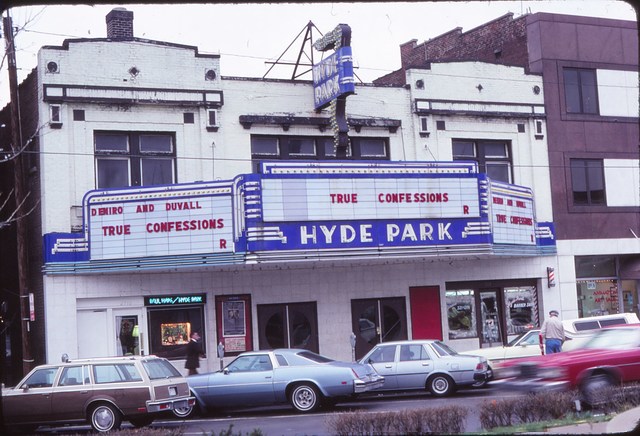 The Hyde Park Theater was built in 1914 and remained with that name until 1983 when it was re-christened the Park Cinema which lasted until its closure in 1988. It always remained a single screen theater.

The theater has a lovely Art Moderne design probably dating from a 1940’s remodeling, including the marquee. When the theater was modernized again in the 1980’s, the concession stand was moved to inside the theater auditorium so the candy employees could see the screen as well as the paying audience. This candy counter was a detriment to the viewing of films because the candy personnel talked to each other throughout the film screenings which was unfortunate for the customer who had paid to hear and see the film. The theater decor was very tastefully done and you always got a friendly treatment from the staff.

August 9 1974 NOW SHOWING Sutherland and Gould in SPYS. They were alot better in MASH. Rated PG.

Here is a photo of the Hyde Park Theatre, form a portfolio of the work of its architect, Howard McClorey, which was published in the October, 1916 issue of the trade journal The Ohio Architect, Engineer and Builder.

Aside from the addition of the modern marquee, the 1983 photo of the facade shows it to have been little changed from its original appearance.

I have to disagree with Chuck about changing the appellation. If it was the Hyde Park Theatre for almost 70 years, and the Park Cinema only for its last five years, there are probably more people around who remember it by its original name than by its final name.

As a rule I think it’s a good thing to have a closed theater listed by its final name, but quite a few exceptions have already been made and the Hyde Park seems to me a good candidate for an exception. If a theater had many name changes over its life, I’d prefer to see it listed under its final name even if that name had been used for only a few years.

In the case of theaters that had a particular name for decades and then another name for only a few years, I think it makes more sense to list it under the long-standing name, with the final name as the aka. People from the neighborhood searching for it on the Internet are more likely to search on the original name than the final name.

One page that should be renamed is the one for the Capri, in Alhambra, California. It’s been listed forever by the third of its five names, the Granada Theatre.