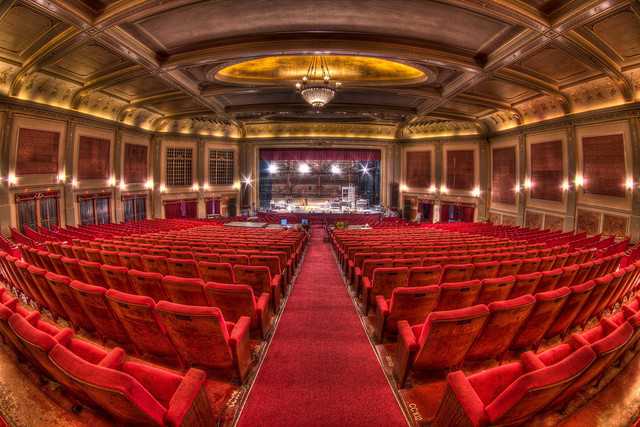 The Zeiterion Theatre opened on April 2, 1923 with a stage show named “Troubles of 1923” starring George Jessel. It had a seating capacity of 1,208. It was soon known as the State Theatre and retained that name until the 1950’s, and was renamed Zeiterion Theatre later.

The Zeiterion Theatre still shows movies now and then.

I am in the theater field and was discussing this with one of my colleagues. We also viewed the information on “haunted theaters.” I would like to research this topic a bit more over time. I live very close to the Zeiterion Theatre. It is quite beautiful!

I know it is beautiful and I have visited it (from Providence) numerous times. Even more beautiful is the long-closed Orpheum Theatre. It was opened to the public for a rope-light tour last October. I went. Did you? A magnificent place that needs a lot of work. I hope they eventually get it restored and put back into used.
http://www.orphinc.org/

No, I was not able to attend that particular event. The edifice is gorgeous, and I have faith that the city of NB will prioritize the Orpheum’s restoration. Thanks for the website link, btw.

According to the Zeiterion Theatre’s manager who I communicated with today (03-25-10) they have 1175 seats.

As the State, this theater is listed in the 1927 Film Daily Yearbook as having 1710 seats and open daily. The seat count is too high.

I am actually related to the Zeitz’s. Kopel Zeitz is my great grandfather. If there is anything anyone wants to know my grand mother might be able to help you out.

Having visited this theatre with EMCATOS on 7/02/11 I did find evidence of “orbs” in some of my pictures an indication of some ghostly presence. The Wurlitzer organ sounded manificent.

I am named after Barney Zeitz and live on Martha’s Vineyard, grew up in Fall River. Barney Zeitz died in 1946 and I was born in 1951. If anyone knows what happened to Barney I would appreciate knowing. I am an artist and would like to build an artistic marquee for the front of the building.

to kk1211kasey – Kopel Zeitz is also my great grandfather !! His son Harry was my grandfather. Harry’s daughter Elaine was my mother. My name is Fred Anderson. please email me at and let’s connect. We must be first cousins. (PS, Barney Zeitz from Martha’s Vineyard is also my first cousin. His father Carl was Elaine’s brother and Harry’s son.) I would love to talk to you and your grand mother

1923 The State Theater originally called the Zeiterion for the first few months of it’s existence, opened on April 2 of that year with 1,208 seats.

It had a small Wurlitzer 2 manual theatre pipe organ.

The first performance was on April 2, 1923 with a stage show starring George Jessel, titled “Troubles of 1923.”

It has been renamed Zeiterion Theatre, after the Zeitz family that previously owned it, and at one time owned several theaters in New Bedford.

It now presents live entertainment of many kinds — theatre, opera, ballet, comedy, and music. It is also the home of the New Bedford Festival Theater with Armand Marchand as Executive Director and George Charbonneau as Artistic Director.

Here’s the web site for the New Bedford Festival Theater

The web site for the Zeiterion Theater is http://www.zeiterion.org/