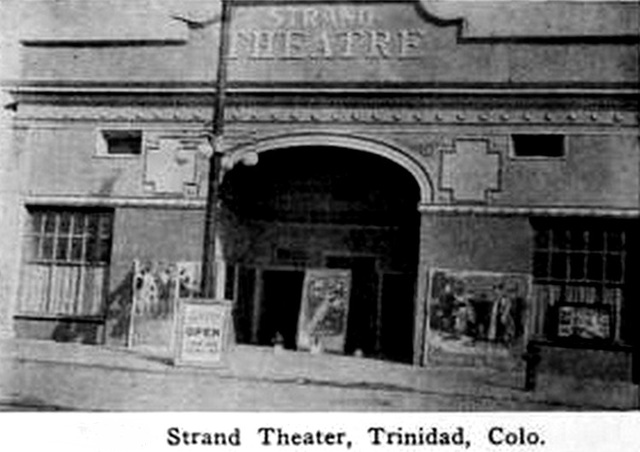 The Strand Theatre was in business from the 1910’s. In the 1930’s until 1940 it was operated by Fox Inter-Mountain Theatres. It was closed around 1970. The vacant building was destroyed by fire in June 1977.

I attended the Strand in the 60’s and early 70’s. It was on Commercial St. It showed B movies like Billy the Kid vs. Dracula and Jesse James Meets Frankenstein’s Daughter. On Wednesdays they showed spanish movies.

Judging from the photos, which show that the Strand had a false front on a building with a gabled roof, it probably dated from no later than the 1910s. It was most likely the new theater being built by E.G. Hower, as reported in the August 21, 1915, issue of The Motion Picture World.

Hower, the first person to exhibit movies in Trinidad, had been manager of the town’s opera house (closed in 1906, according to that year’s edition of Julius Cahn’s Theatrical Guide) and had, in the early 1910s, operated a storefront movie house called the Crystal Theatre, located on Main Street. His 1915 project was to be the first theater in Trinidad built expressly to present movies.

Chuck: Aside from that photo that shows up on Flickr and other sites, there’s very little about the Isis on the Internet. The 1910-1911 Polk City Directory for Trinidad lists it at 307 N. Commercial Street. In the 1915-1916 directory it is listed at 243 N. Commercial Street (CinemaTour lists it at 114 W.Main Street, but doesn’t cite a source or give a year.) Unless Trinidad renumbered, the Isis must have changed locations between 1910 and 1915, and I don’t know which location the 1913 photo depicts.

Michael G. Ankerich’s Broken Silence: Conversations with 23 Silent Film Stars says that about 1914 the owners of the Isis, Leon and Edyth Osborn, sold the theater and moved to California to work in the movie business. Their adopted daughter had a brief acting career during the silent era as Baby Marie Osborne. Here is her obituary. It doesn’t mention the Isis, but is worth reading.

The March 4, 1916, issue of The Moving Picture World has an item about the Strand:

“Jack Nash of Trinidad has taken over the Bio theater there and will remodel it and operate it under the name of the Strand.”

I have also found two references to Jack Nash as operator of the Isis Theatre, in 1913 and 1915. The fact that no theaters are listed at the Strand’s address in the 1915-1916 city directory (probably published in late 1914 or early 1915) increases the likelihood that the Bio/Strand was the theater under construction in August, 1915, as noted in my earlier comment on this theater, November 11, 2010.

Description needs to be corrected, this was open later than the ‘50s. Page 65 of the NRHP listing for downtown has a circa 1970 photo showing that the façade was covered in white stucco, and a simple triangular marquee with 'Strand’ on a blade at the front was added. Looks like the remodel dates to around 1940-50. At some point it joined far too many historic buildings downtown in becoming a parking lot.

Boxoffice, June 20, 1977: “The Strand, Trinidad, has been destroyed by fire. Prior to its closing several years ago, the theatre had been operated by Sally and Marie Sawaya, who continue to operate the Fox Theatre and Peak Drive-In at Trinidad.”