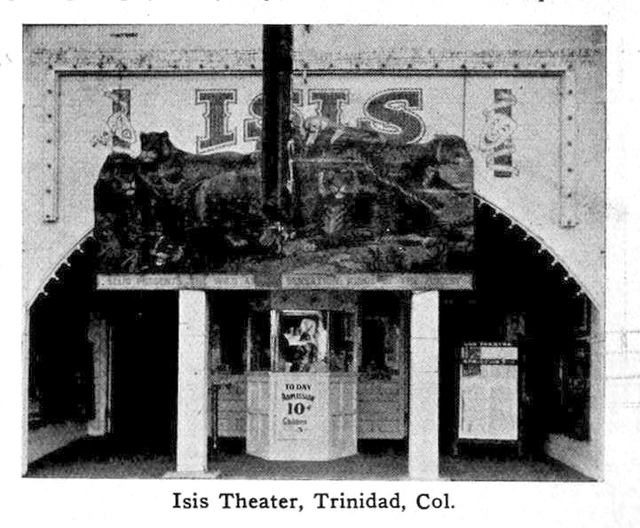 The Isis Theatre was opened as early as 1913.

Theater is not demolished, although it’s very hard to tell it was ever there. Page 119 of the NRHP listing for downtown has a circa 1970 photo. Recessed entry under three small arches, and no marquee, just the name painted across the front (where it says ‘Alpha Pawn’ now).

Motion Picture Daily, Oct. 28, 1960: “Only one theatre – the Isis in Trinidad, Colo. – received a loan from the Small Business Administration in September. A participation load of $5,000 was approved for the Isis which employs three.”

A letter dated September 18, 1911, from A. R. Wilson, owner of the Isis Theatre in Trinidad, was published in the October, 1911 issue of Motography. Six theaters were listed at Trinidad in the 1914-1915 American Motion Picture Directory. In addition to the Isis, there were the Best Theatre, the Central Park Theatre, the Crystal Theatre, the Maze Theatre, and the Rex Theatre. Only the Central Park was listed with a location, that being San Juan Street and Santa Fe Highway. However, a 1907 city directory listed the Crystal at 205 W. Main Street. None of the theaters in the 1914 AMPD were among the four listed in the 1926 FDY, though there was a house called the Palace-Rex listed.

The bit about the Isis having been the West Opera House should be removed from the description. There was no West Opera House in Trinidad. The West Theatre, opened in 1908, was the house that later became the Fox West Theatre. It didn’t become a movie theater until the 1920s.