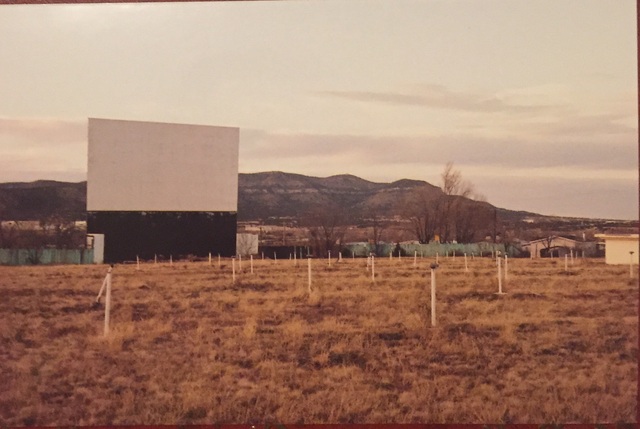 Trinidad, Colorado was home to the Peak Drive-In. Opened in October 1949 and during the late-1950’s, the Peak Drive-In was filling up every 350 parking place for the latest John Wayne movie and was owned by N.S. Sawaya. It was closed in 1988.

Sits just east of the municipal power plant, which has the address of 1925 E Main St.

First listed in the 1949 Theatre Catalog, owned by John Sawaya.

The Peak was still listed in the 1987 IMPA, but it was closed by the time I first visited Trinidad in 1997. Thanks to the dry mountain air, it still looks almost ready to open 20 years later; the screen is in good shape and the concession building is still showing on satellite views.

Google Street view from November 2016 shows the whole thing still there. Screen, marquee, ticket booth, concession stand and even the poles in the lot.

John Nathan Sawaya passed away on October 19 1987, at age 63. The Peak was still listed in the International Motion Picture Almanac’s final drive-in survey in early 1988. Based on Anthony L. Vazquez-Hernandez’s photo comment, that’s probably when the Peak closed permanently.

A more accurate address for this theater is 2211 E Main St Trinidad, CO 81082. This points directly to the entrance road. This drive in due to its angle and the entrance is closer to Cemetery Rd. than Pinto St.

TRINIDAD, COLO. – The Peak Drive-In, first open air theatre to be built here, recently was opened by N. S. Sawaya, who has operated the Strand here several years. Located on Route 350, near the municipal power plant, the new drive-in is equipped with in-car speakers.