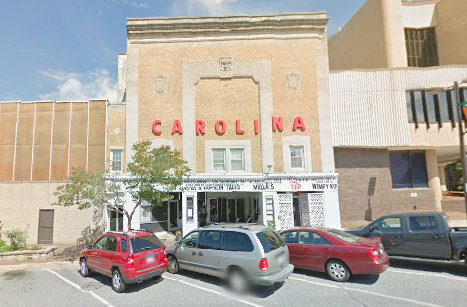 The Carolina Theater was opened in 1935.

LACY PAULINE STARNES longtime little lady at the box office, died past week at age of 90+. The CAROLINA THEATER OF HICKORY has lost a member of the family., The marquee is dimmer tonight due to the passing of this loving lady. She worked in theater business for over 64 years., 34 years being with the Carolina and the Colonial Theater Group of Valdese NC

Any vintage photos of this theatre dating back to when it first opened?

Some architectural detail. He needs a rhinoplasty:
http://tinyurl.com/yzvr5u7

***These will be added to the Cinema Treasures site.

The NRHP Registration Form for the Harris Arcade mentions the Carolina Theatre, saying that it was designed by Charlotte architect M. R. Marsh. Marion Rossiter Marsh also designed the Plaza Theatre in Charlotte. His firm was in operation from 1922 to 1964.

Okay, first things first… the Carolina is a special place in my life, though not necessarily always in the most positive way. I worked there in the early nineties as an assistant manager while going to school at the nearby college. It also marks the only time in my life that I was ever fired from a job.

It was a fascinating place full of history: a great place to wander around and check out every little nook and cranny. It was also frustrating – you could tell how grand the place must have been in its earlier incarnations before the balcony was converted to a second auditorium (not for the handicapped, mind you, unless they figured out how to install an elevator over the years). Behind the permanently installed main screen was a full stage complete with fly system, making you wonder why they would permanently block it off. Speaking of history, it wasn’t all pleasant history, as the bathroom up in the upstairs projector booth sported “Blacks Only” painted on the door. Don’t know if it’s been removed since, or left for historical context.

So aside from that, you couldn’t help but want the place to go back in time and undo some of the changes. What was left was still an interesting place in a town that at the time was lacking. I’ve only driven through Hickory twice in the last 23 years since graduation (nowhere near the theater), so I know the town has changed dramatically for the better. I’ve seen the Carolina’s website and the rennovations that have been done since I last saw it. I have to commend the new owners – one was the manager when I was there – on their commitment to keeping the theater a valued location in the city (and for removing that awful facade out front above the marquis).

Although it wasn’t entirely unexpected, it was sad to hear of Lacy’s passing – she was an institution even when I was there and a super sweet lady.

As for the firing, all I can say all these years later is that I didn’t do it (take money missing from the ticket window on two occasions when I was managing). After moping about it for weeks, and having two professors instruct me to snap out of it, I doubled-down on my school work and had a major grade improvement in my last year of college. So I guess it was positive after all.