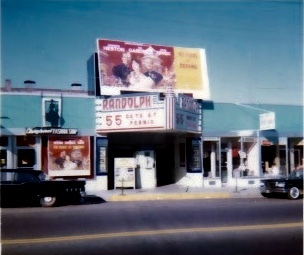 The Randolph Theatre was included in the MGM Theater Photograph and Report project. There is an exterior photo on the report dated April 1941. The theatre entrance was in the middle of a one-story business block, with the Brockton Gas Light Co. to the left and R.E. Lyons and Randolph Drug to the right. The theatre had a triangle marquee with “This Thing Called Love” posted on it. The Report states that the theatre is at 68 North Main, that it has been playing MGM product for 3 years; that it was built in 1938, is in Excellent condition, and has 702 seats, all on one floor. There are no competing theaters in town, and the 1940 population was 7.600. This info replaces postings to this page which have somehow been deleted. (very annoying)

From the 1940s a phot postcard view of North Main St. and the Randolfph Theatre.

I didn’t realize that the Randolph Th. was set so far back from the curb. (The MGM Report photo was taken head-on from the street). Note in the background a white building with columns across the front- I wonder if it is Stetson Hall, the town’s previous cinema, and still standing today.

Ron, you are correct: that is Stetson Hall in the far center background of the photo.

I was the manager of the RANDOLPH during the early sixties all color photos from my collect was there for almost three year, the theater had a large parking lot, and did very well playing off of Brockton, so many times it played films long before any Boston sub. theater did, there was an upstair apt. nice for me on late nights or snow, very wonderful times I am on roof of one photo enjoying the 4th of July parade

The theater always had something for the kids Sat Sun or summer kid show even 13 chapter film run for thirteen week, we even had special tray we place in on concession stand for just the kids that is nickel candy for kid shows, the only reason this theater closed was owner a Bank they took it all down