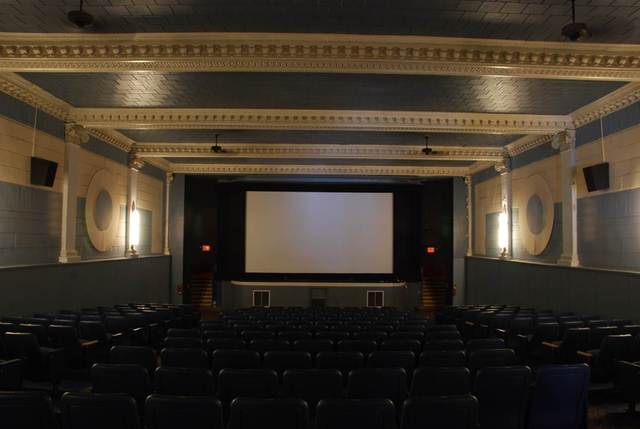 The Park Theatre, as it was originally known, was opened in late-1913 by a local businessman, B. H. Cooper, in downtown Champaign, IL.

However, the Park Theatre didn’t have it’s ‘official’ grand opening until several months later, when a pipe organ was installed to accompany the epic spectacle, “The Last Days of Pompeii”.

In 1929, the Park Theatre began to show sound films, and not long after, Cooper sold the theater to the LaSalle-based Alger Theatres chain, who ran the Park Theatre as a ‘poor cousin’ to Champaign’s two largest and much more ornate theaters, the Orpheum Theatre and the Virginia Theatre.

From the late-1940’s on, it would mostly screen B-grade Westerns and comedies. The Park Theatre was closed in 1958.

The Art Theater Guild reopened the Park later the same year, renaming it the Art Theatre, to put the focus on the films which would now be shown there – foreign and industrial features, the first being “The Red and the Black”.

For another decade, the Art Theatre would be the premiere house in the Champaign-Urbana area for alternative fare, including an Ingmar Bergman festival, revivals of such classics as “Citizen Kane” and “Beat the Devil” and, in 1967, a series called ‘Underground Cinema’ which featured avant-garde works by Andy Warhol, Maya Deren and Bruce Connor on Friday and Saturday nights.

Urbana-native Roger Ebert would call the Art Theatre the place he ‘learned about the art of film’.

On New Years' Day 1987, the Art Theatre was bought by John Manley, Ron Epple and Tom Angelica who renovated the run-down theater and reopened it as a venue once again for foreign and art features. The partners decided to change the theater’s name to the New Art Theatre, to break with the assocation the Art Theatre had with adult fare for so long.

The New Art Theatre closed in February of 2003, but later reopened, once more showing foreign and industrial films. It was then owned and run by the same owners of the historic Lorraine Theatre in Hoopeston. By May 2016 it had been renamed Art Theatre CO-OP.

Yes; the Art has digital.

Here are some details about the celebration:

8:00 PM – TIME TRIP with the Andrew Alden Ensemble A specially-commissioned film/music event Classic shorts ranging from the earliest cinematic experiments to Buster Keaton & the 1960s avant-garde accompanied by the ANDREW ALDEN ENSEMBLE. This program was curated by Austin McCann, our GM, and Andrew Alden.

Tickets are available to the whole event ($20, $15 for co-op owners) and just for TIME TRIP with the Andrew Alden Ensemble ($15). Tickets can be purchased here.

Unfortunately the new owners of the ART theatre decided to not have John Allen set the EQ for their new digital sound processor so they no longer have an official HPS-4000 sound system. I hope they will reconsider this decision because an HPS-4000 system without the right tunning results in not only poor sound but is a total waste of an extraordinary sound system.

I saw a movie here this week – – top-notch image and sound. Well done.

Dear Friends and Community Partners of the Art Theater,

It is with deep sadness that the Art Film Foundation announces it has stopped showing films and that it will cease operations at the Art Theater on October 31, 2019.

We know that you, our members and audience, are amazing. We have made so many memories together: we’ve laughed, screamed, and cried tears of joy and sadness. We’ve shared in groundbreaking films and unique experiences, from Casablanca to Rocky Horror. When we hit rough patches in the past, you stepped up and helped us with emergency fundraising. Emergency funds help with discrete, one-time needs, and the Art Theater has remained in operation because of your passionate support and the tireless work of our wonderful staff. Unfortunately, the film industry is changing and we will face systemic challenges that show no signs of abating.

We thank you for your donations, your volunteer hours, your memberships, and your attendance. While the Art Film Foundation and the Art Theater have come to an end, we truly believe that this incredible community of cinema-lovers in the local area will carry on.

With gratitude,
The Art Film Foundation

More details on the closing of the Art Theater: https://will.illinois.edu/news/story/art-theater-closes-can-other-art-house-survive

Building and business for sale.
Article via Tim O'Neill.