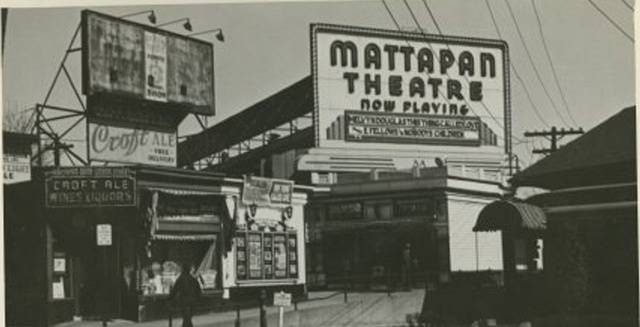 The Scenic Temple Theatre was located on River Street on the east side of Mattapan Square, to the south of downtown Boston. It was opened prior to 1914. By 1926 it had been renamed Mattapan Theatre. It was still open in 1950.

The MGM Theatre Photograph and Report form for the Mattapan Theatre has an exterior photo dated 1941. The theatre was located in back of a one-story commercial block on River St. There was a walkway that sloped up to the entrance. There was no marquee but on the roof above the entrance was a gigantic billboard which read “Mattapan Theatre” in huge letters. Below the name was “Now Playing” and below that were 2 lines on which movie titles could be posted. The building possibly may have be built for other purposes and was adapted as a cinema. It was adjacent to the trolley terminal and yard in Mattapan Square. The Report states that the Mattapan had been a MGM customer for 15 years; that it was built in 1910, was in Good condition and had 781 seats.

The entertainment pages of Boston newspapers in the late-1940s had a section of very small ads for Neighborhood Theatres. The Mattapan Theatre shared an ad with the Magnet Theatre in Dorchester. The 2 theatre names were at the top of the little ad, and the same movies were booked into both theatres simultaneously.

The Mattapan Th. is listed in the 1927 Film Daily Yearbook as having 500 seats and open 6 days/week.

The address for the Mattapan Th. was listed as 512 River St. in a Boston business directory, issue 85, which I think is 1921.

This theater was listed as “Scenic Temple” in the Boston Register and Business Directory, Issue 83, 1918. There were a number of movie theaters with that name at the time.

In the street directory of the 1918 Boston Register and Business Directory, Issue 83, this theater, as the “Scenic Temple”, was listed at 512 River St. It was on the south side of River St., just east of Mattapan Square, and was the last business on that side of the street before crossing Blue Hill Avenue.

In the 1921 edition of the Boston Register, Issue 85, this theater was listed as “Mattapan Theatre” at 512 River St.

In the Street View photo above, the Mattapan Theater was located across the street in the center of the photo. The building just on the right, with the over-hanging roof, was the old Mattapan railroad station. It’s the one-story stone building with the big peaked roof. Until the mid-1920s, you could take trains from here to South Station via Ashmont and Fields Corner. Or an alternate route was via Neponset. The latter route went by the future location of the Neponset Drive-In Theatre.

And of course you can still take trains from here to South Station … but now it’s a streetcar line to Ashmont and then the Red Line subway from there through Fields Corner into Boston.

Yes, the trolley route and the Red Line, from Mattapan Square as far as the tunnel portal near Andrew Square, use old New Haven Railroad right-of-way. These lines were part of a huge network of local rail lines and streetcar lines which made visiting neighborhood theaters like the Mattapan Theatre easy.