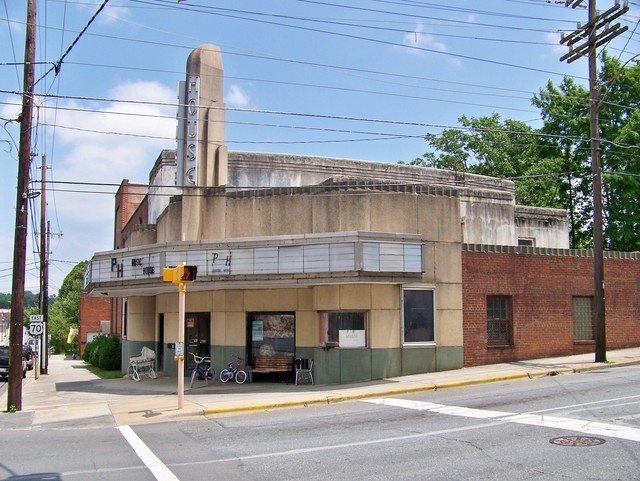 The House Theatre is an Art Deco style gem that looks to be untouched and original on the outside. Built in 1950, this theatre sits on the corner of E. Court Street and S. Garden Street in the heart of Marion right behind the McDowell County Courthouse. The marquee wraps around the corner entrance and the vertical sign has a great Deco style font spelling out the name. It was closed in 1965.

Great shots of the house.

I now live in Marion, and talking to a local I think it’s doubtful this theatre ever showed films. I’ve not been in it, as it’s now a church venue, but this was apparently a local regional theatre for plays and such. It’s in dire need of restoration, but I fear the local community has little interest, but it would be great to restore and convert to a film revival house, uhfortunately, Marion is a very small town.

there was also another movie theater on west court st,it was also owned by the house family. it was open until the mid sixties. belk made an annex out of it. yes marion is a small town. it is a town full of greedy people who care nothing about history. if some one tries to restore the theater . the city council would thro every road block they could in the way. if they do not get something out of it. it will not get approved.marion id a dead dead town

I lived in Marion from 1972-1986, and it was, in fact a movie theater. And was open until 1982, I believe it was. The McDowell Twin Cinema opened out on the 5-lane, along with a couple additional restaurants, and it pretty much spelled the end of the line for the House. As for myself, the only theater to go to there in my childhood was the House. I saw countless movies there, including Jaws, Jungle Book, Fox and the Hound, Pete’s Dragon among others. It’s sad to see it languish in such a sorry state. I live in Pensacola, FL now, where they just recently restored the old downtown art deco theater, and it would be nice to see a similar restoration on the House Theater in Marion.

Apparently closed again and on the market. http://www.mcdowellnews.com/news/marion-event-center-closes-in-old-house-theater/article_11c232f8-f555-11e6-bcba-e397796f2f83.html

Who owns the building now? It would be a great looking place to have concerts. Would love to know who owns it….Check us out at www.onfireconcerts.com www.facebook.com/ronjohnson61

The story is behind a paywall, but the January 16, 2020 issue of the McDowell News said that a recent college graduate named Jake Laurent had bought the House Theatre and planned to restore it for use as a live music venue. I’ve found no more recent news of the project, and fear that the timing might have been fatal to it, the announcement having been made shortly before the COVID-19 pandemic began.

From 1973 to 1967 I spent nearly every Saturday afternoon in this theater. It didn’t matter what was showing, it was just what I did every week. I saw my first 007 movie there, cheesy Elvis movies, and some masterpieces like Doctor Zhivago. I was 8 years old in 1963.