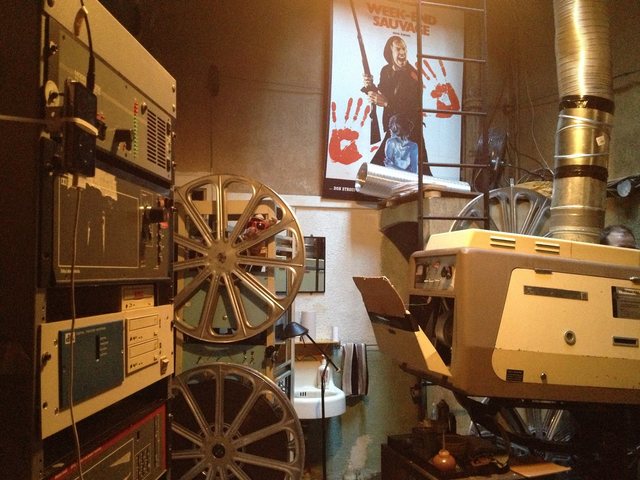 The Mayfair Theatre opened on December 5, 1932 with Dorothy Boucher in “The Blue Danube”. The auditorium decoration was in an Atmospheric Spanish Renaissance style, with a sky blue ceiling. It had a seating capacity of 700 on a stadium plan, with a stepped raised section at the rear, rather than the usual overhanging balcony. It was renovated in 1969.

DTS was added in 1993 when “Jurassic Park” opened in the theatre.

It was designated a Listed building in September 2008. It was said to be closing on November 30, 2008, but thankfully this never happened and it continues today.

Here is the heritage designation for this theatre from the city of Ottawa website.

There are also some excellent pictures of the interior. It is an example of a Spanish Morrocan style “atmospheric”..

Good news! Looks like the Mayfair will survive as a cinema after all.

OTTAWA – Facing closing at the end of the month, the Mayfair Theatre has found new life thanks to a self-described “dream team of film-loving investors” with ambitious plans that could even include serving alcohol to film-goers.

The partners – John Yemen, a film scholar and entrepreneur, Paul Gordon, the Mayfair’s current film conservator and part-time projectionist, and filmmakers Lee Demarbre and Ian Driscoll – will announce Tuesday that they have leased the 76-year-old Bank Street cinema for 10 years from its Vancouver owner, Stephen Ng.

The Mayfair will close in December while they refresh the interior and make technical improvements. They plan to reopen with a party and open house on Jan. 2, 2009.

“It’s going to be state of the art by the time we open it,” Mr. Demarbre said in an interview. Among other things, his group plans to install Dolby digital sound and replace the sagging seats. “We want people to be comfortable at the Mayfair,” he said.

Word trickled out in August that Mr. Ng had balked at the cost of needed upgrades and planned to close Ottawa’s oldest surviving movie theatre Nov. 30.

The heritage designation was key to his group’s ability to lease the theatre, Mr. Demarbre said. “There were apparently people interested in putting condominiums there. We couldn’t compete with that kind of money.”

Despite “big money pressure” for redevelopment on the site, Mr. Demarbre said Mr. Ng is happy the Mayfair will survive. “His desire was to have someone come and run it as a cinema,” he said.

Mr. Demarbre’s group will scrap the Mayfair’s strategy of showing second-run commercial films in favour of more eclectic programming – everything from art house, foreign and Canadian films to midnight screenings and festivals.

The only Ottawa theatre showing similar fare is the Bytowne, a thriving repertory cinema on Rideau Street. “We’d be interested in bringing those types of movies to the south end of Ottawa,” Mr. Demarbre said.

The Bytowne’s owner, Bruce White, is considered the best programmer in Canada, he said. “I don’t think Bruce has anything to worry about from the Mayfair. If anyone can appreciate friendly competition, it’s Bruce White.”

Mr. Demarbre fondly recalls watching Hong Kong filmmaker John Woo’s action classic, The Killer, at the Mayfair. “You’d bring popguns and run up and down the aisle and shoot at each other.”

In recent years, the Mayfair has gotten away from such inspired mayhem, he said. “I’m surprised at the kind of movies they’re showing. It’s very commercial, stuff you can go see at the Rainbow theatre and stuff that’s available on video at almost the same time as it’s playing at the Mayfair. It’s not very inspiring.”

Mr. Demarbre’s group has been inspired by theatres such as the Alamo Drafthouse Cinema in Austin, Texas, and Brewvie’s Cinema Pub in Salt Lake City, Utah. Both serve alcohol with their flicks, something Mr. Demarbre said his group is keen to do.

“If they can do it in Utah,” he said, “we can do it here. We want it to be fun to go to the movie theatre. We’ve got to get people out of their seats.”

Mr. Demarbre and his partners have been trying for years to open a repertory cinema in Ottawa. They approached Mr. Ng about the Mayfair several years ago, “but he didn’t bite,” Mr. Demarbre said.

When the Great Canadian Theatre Company moved into its new building at Wellington and Holland, they tried to acquire its old building on Gladstone. They also looked at a theatre-turned-church and a furniture store in the Westboro area.

Recently, out of frustration, they’ve been showing movies the last Saturday of every month at Club Saw in Arts Court.

I was totally stoked to hear about the new owners for the theatre big time~ I Have only been to Ottawa twice have managed to make it there on both occasions for Dark Knight, Burn After Readin, Silent Partner along with another Grindhouse film and was really impressed with the layout and preservation that has taken place. Great atmosphere to watch a film ;–)

One of the best small neighborhood theatre’s to see a film. Fond memories from my days of living in Ottawa. Fantastic original interior. A real cinema gem although the exterior could use a bit of an upgrade.

Good luck to the new owners.

The theater is celebrating its 78th anniversary: View link

Here’s a short video tour I shot of the Mayfair Theatre in Ottawa this year: 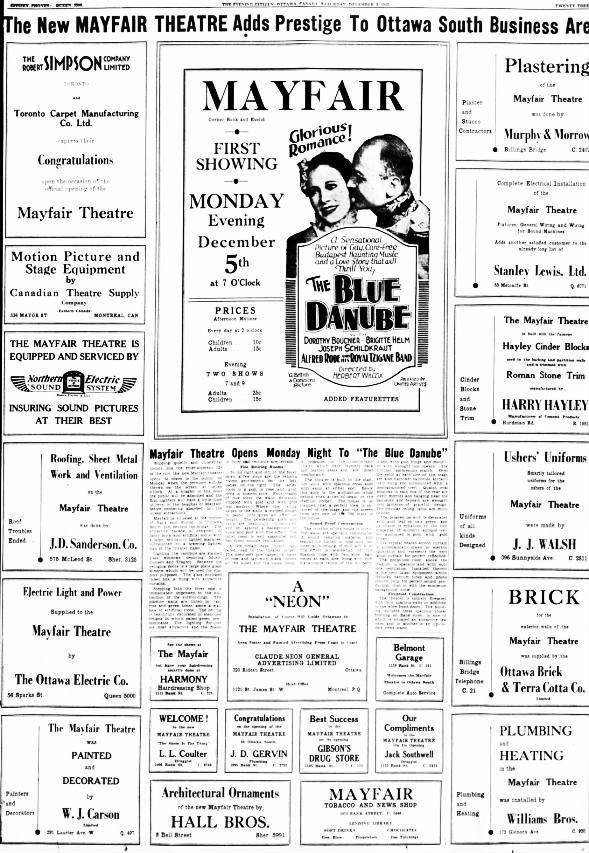 Theater building was listed for sale, touting redevelopment potential (read: getting rid of the theater). Theater operator says: Not so fast. CBC story here. The web page for the listing appears to have been deleted.