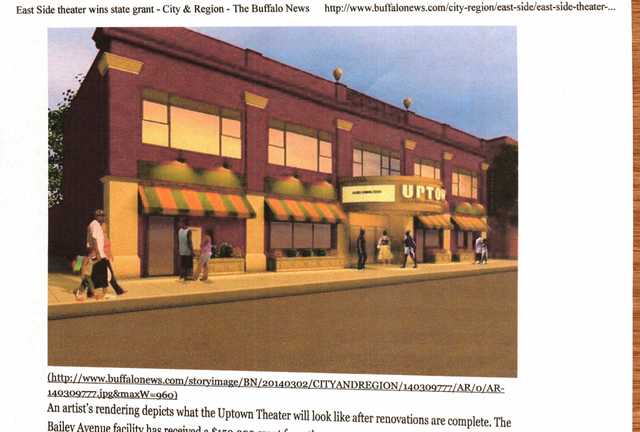 The Varsity Theatre was opened November 28, 1923, with 863 seats. The opening movie was “Pioneer Trails” starring Cullen Landis. The Capri Art Theatre opened in the former Varsity Theatre building on May 15, 1970. In the 1970’s it ran adult movies. Last known as the Uptown Theatre, it had been closed several years when it was purchased by its current owner Ibrahim Cisse in 2010.

In February 2014, plans were announced to restore the theatre, to be used for live performances, occasional movies and community events, with a planned re-opening for 2015. It reopened February 12, 2015 as a live music venue and has been renamed Varsity Theatre again.

The Palace Theatre in the picture DonLewis linked to is not this house, but one on Main Street in Downtown Buffalo. It isn’t listed at Cinema Treasures. As far as I’ve been able to discover, that Palace was always a burlesque house.

“In early 1962 Fred Keller leased the theatre [the Circle] and renamed it the Circle Arts, and, as the new name implied, he specialized in European films. A year or so later he lost the lease and moved to the Varsity Theatre on Bailey and took the Circle Arts name with him.”

Here is a weblog post from early 2010 about Abraham Cisse (though they misspelled his surname as Cissie), who had recently bought the Uptown Theatre and was in the process of renovating it. I’ve been unable to find any more recent information about the project, but Mr. Cisse is apparently still the owner of the property.

Here is another recent photo of this house as the Uptown.

Where did the postcard picture go? It was there this morning. Does anyone have a direct link to the Don Lewis postcard showing the Palace (and the building that replaced the Bijou)? There a few other Buffalo sites that have photos of the Palace Theatre and Shelton Square. It is amazing how many theaters there were in Buffalo during the 1930’s-40’s. If you ever have the time, see Shea’s Buffalo Theatre. It is astounding! It is the grandest, most extravagent theatre I’ve ever seen. It’s been a while since I’ve been there…I saw “North By Northwest” there in 1996. Radio City Music Hall is fantastic, but for sheer opulence, see Shea’s.

Agreeing with Joe about my postcard image of the Palace Theatre and the Capri Art, I have pulled it.

This link deals with a grant the theater has recieved.

The above link deals with this theatre.

The $150,000 Kensington neighborhood theatre launched on November 28, 1923 in Buffalo with the film, “Pioneer Trails.” Manager James Cardina was then able to temporarily close his Kensington Theatre to remodel it. 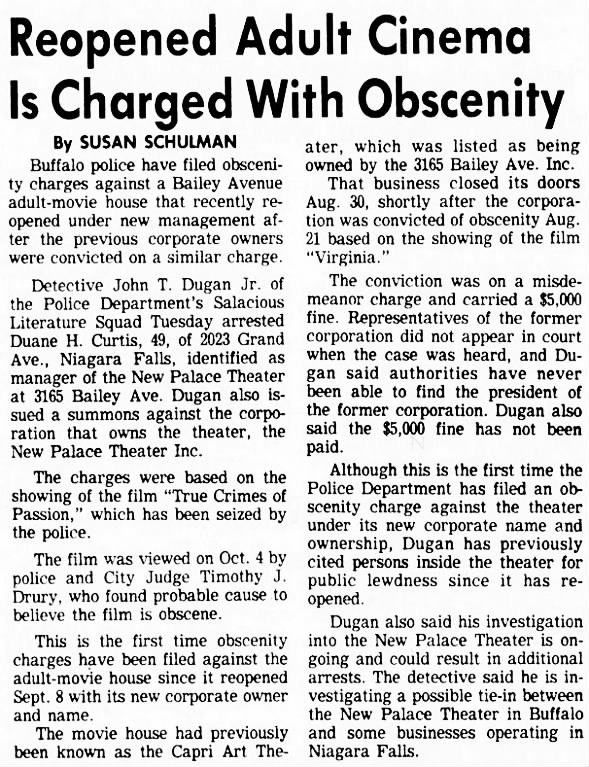 It closed as Capri Art on August 30th, 1986, and reopened as New Palace until early 1996. Live performances later in 1996 and after. Raided often during its adult cinema days.