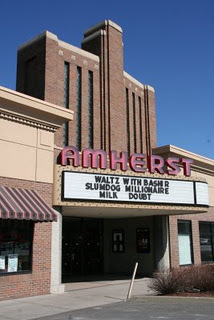 The Amherst Theatre was opened January 18, 1942 when it had 1,186 seats in its single auditorium. The Amherst 3 Theatre has recently received a physical upgrade as well as changing its format from art house movies to more mainstream fare.

Dipson Theatres is also revamping the interior of the theater and replacing the old movie house’s 1940’s marquee.

The theater is also adding more leg room dropping attendance from 750 seats to 690.

I wouldn’t necessarily say that the Amherst plays “mainstream” fare. Although they have started skewing slightly mainstream since AMC closed the nearby University 8 in 2004 (they’ve played things like “All the Kings Men” and “World Trade Center” in the past year) the Amherst is still primarily an art house venue (this week for instance they are playing “The Science of Sleep”, “Little Miss Sunshine”, and “Shortbus”).

WOW! Where do I begin?

I was a student at the University of Buffalo from 1985 to 1988 and I practically lived at this theater because it was on the other side of the huge parking lot across from my dorm building, Goodyear Hall. I saw nearly every midnight movie they played during those years including, PINK FLOYD THE WALL, PINK FLOYD AT POMPEII, THE SONG REMAINS THE SAME, JIMI HENDRIX, BLADE RUNNER, RETURN OF THE LIVING DEAD and a couple of old STAR TREK movies.

Even then, they were mostly art films at a time that I hadn’t developed an appreciation for them yet. However, after some time, I figured out that the Amherst Theater would show films released by Columbia Pictures and Orion Pictures (when they existed). I think I saw PLATOON three times when it opened there. This theater also had the courage to book the film ISHTAR when it opened. Sad, sad, sad!

The manager of this theater at that time was notorious for hitting on his female college employees. Every one of them would quit on him eventually.

I’m glad after nearly 20 years, it did not close down.

If there’s anybody else out there who attended UB between 1985 and 1988 and lived on the Amherst campus, I’d love, love, love to hear from you!

Been thinking about this theater again recently and remembering my college times at UB. Some other films I can remember seeing at this theater during the 80’s include:

JAGGED EDGE, WHITE NIGHTS, QUICKSILVER, THAT’S LIFE!, PLATOON, NO MAN’S LAND, FLOWERS IN THE ATTIC, BACK TO THE FUTURE (re-release) and TOP GUN (also a re-release).

Back then, I had not learned to appreciate art films yet, so I usually stuck with whatever mainstream films this theater would get. I regret not seeing BLUE VELEVET, HANNAH AND HER SISTERS and THE LAST EMPEROR on screen when they premiered at this theater and had a very long run.

I seem to remember that before they carved this theater into 3 screens, the ceiling had a motiff that somewhat resembled an old-fashioned tombstone radio.

Saw my first movie here with my cousin, father and uncle in 1958: WHITE WILDERNESS.

Installed recliners late last year along with new carpeting and bigger screens (last time I attended I was in one of the smaller theaters, I believe it sat around 80).

I attended UB from 1984-1989 and saw many movies here, especially when I lived right across the street in the dorms. Along with Tops, it’s one of the few businesses still open from that era, with Record Theater closing very recently. I saw ‘The Wall’ (Pink Floyd) and ‘Platoon’ at this theater for the first time (I’ve seen each multiple times since then), but those two in particular stand out. I’ll always link the power of those films with the Amherst Theater.