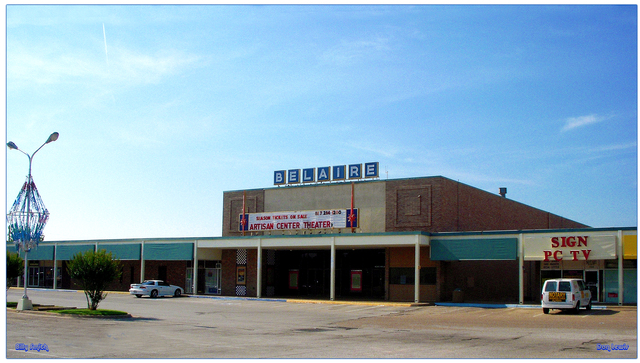 The Belaire Theatre, located at the Belaire Plaza shopping center, was opened April 8, 1966 with Hayley Mills in “That Darn Cat”. It was twinned on July 2, 1976. On May 8, 1987 it became a four screen theatre. It closed in 2000. The Belaire Theatre has been home to the Artisan Center Theatre since 2005. The Artisan Center presents family-friendly live theatrical productions in a theatre-in-the-round format.

This theatre was opened in April 1965 as the newest Interstate suburban theatre; opening night was a special screening of The Trouble With Angels followed the next day by the regular run of Walt Disney’s That Darn Cat. The Manager was Bob Narowitz who formerly managed the Tower Theatre. I spent a lot of my youth in this theatre as we lived close by; sometimes I even rode my bike over! This theater usually showed family features including the Disney’s and Elvis although more mature fare was shown, still fairly suitable for older kids—although in 1970, the X-rated Midnight Cowboy showed up after winning the best picture Oscar (just before the X rating was slapped on porno!). In June ‘77, like so many single screens before, it was twinned and I rarely went back. In the late '80’s it was forpled (my term for becoming a four-plex). I still miss this theatre to this day!

On Nov.4 1970 it was showing “TWO A PENNY”.It later became a ABC INTERSTATE THEATRE.

From Hurst a photo of the Belaire theatre.

The John R. Thompson architected Belaire Theater project was just the second new build Interstate Theatre for the Dallas-Fort Worth area since the 1949 construction of Dallas’ Forest Theatre. The proposed 1,000 seat theater was arranged continental style with long rows instead of multiple aisles. The rows would become wider by the time it was built ending up with 860 total seats all on the main floor. The theater was housed in the Hurst-Belaire Shopping Center which, itself, opened theater-less on June 2, 1963 in Hurst, Texas by George P. Macatee III and Robert S. Folsom. The $350,000 theater had 70mm projection with 6-channel stereo sound and parking for mre than 700 cars. It was part of Interstate Theaters $4 million expansion with nine theaters including the Westwood in Richardson, South Fort Worth’s Wedgewood, the Westwood in Abilene, and Pasadena’s Parkview Theater.

The theater opened April 8, 1966 with “That Darn Cat” a day after an invitation-only screening of “The Trouble with Angels” the night before. It was quadplexed into four auditoriums and became a sub-run dollar house. The theater appears to have had a 20-year lease honored followed by, perhaps, a 15-year lease where it closed as a decrepit, seedy independent dollar house in a shopping center that had neither been updated nor had many retailers remaining when the theater closed in December of 2001. When the doors locked for the last time, few seemed to take notice. However, at least one group would come calling.

Empty for four years and with a very uncertain future, the Artisan Center operating in the faded North Hills Mall was looking for a new home. In 2005, the live theater group took over the Belaire knocking down the wall between screens three and four while using houses one and two for rehearsals and workshops. In 2013, the Artisan signed a five-year extension which would take the theater past its 50th anniversary. The theater was the Hurst-Belaire shopping center’s beacon of light salvaging the theater and proved that this location could provide decades of entertainment for the area.

While I was wrong on the opening date, this theatre did not have 70MM capability—-in fact, the surround speakers were mounted in the ceiling rather than hung from the walls which Interstate was doing in all their new theatres at that time.

Thank you for sharing the updates “dallasmovietheaters” and “jamestv”. As a co-founder of Artisan Center Theater, I am working to help restore this area of Hurst and create a historical picture museum of the many people that came here to see movies or shop or “cruise” since the 1960’s …. We are seeking pictures that anyone may have of the Belaire Theater or the shopping center. Believe it or not, these are difficult to come by. We have invested nearly $1 million in renovations so far from generous contributions from the community. More work is needed. Much more. Obviously restoring the old movie theater to a new movie theater is impossible. But we have proven (with over 90,000 people attending in 2014) that it can still be a valuable asset to the community as a “family-friendly” entertainment venue. The City of Hurst is considering creating a cultural arts district in this area, centered around Artisan. Any more stories or pictures you can locate would be so helpful and could be sent to my attention: Rick Blair; Artisan Center Theater | 444 E Pipeline Rd. | Hurst, TX 76053 | 817-521-3699-cell | http:/artisanct.com |

Indeed, Artisan moved into the 404 space in 2005 along with the old Pizza Inn at space 420. Originally, the intent was to remodel the Belaire and create a live theater-in-the-round for our patrons. However, engineers and architects determined it would cost 3 million to renovate the building. In 2013, we negotiated an agreement with the City and property owners to use the Belaire Theater “as is-where is” and bring the building up to modern safety codes. The most recent “fourplex” conversion was maintained. All of the seats and screens were removed. A sprinkler system was installed (with generous contributions from the City of Hurst and the Property Owner) and new electrical wiring to allow for lighting and exits. In it’s current configuration, the original lobby is now a rehearsal room and dance studio. Theater 1 is a prop storage room. Theater 2 is now a costume storage room. Theater 3 is our scene shop for building sets and theater 4 is another rehearsal hall and multi-purpose room.

For years, the Belaire Theater had the reputation of being haunted with many stories shared by former employees. To the best of our knowledge, the new activity has eliminated any paranormal activity, though we still receive requests for groups to evaluate.

Artisan Center Theater now occupies 28,000 sq, ft. of space and operated 2 live theaters. The largest is our main stage at 200 seats and the new Children’s Theater is 150 seats. We have productions 5 days a week and remain closed on Sunday.