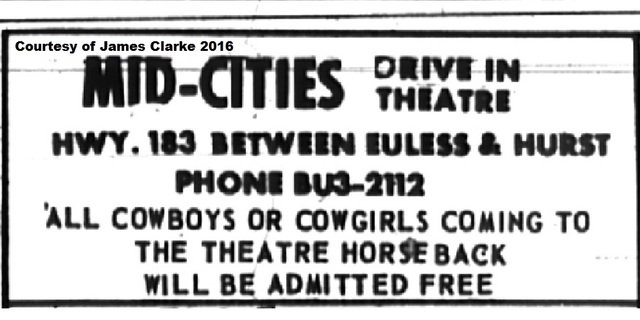 A Gulf States Theatre, the Mid-Cities Drive-In was located in Euless, TX. It opened July 21, 1962 with Spencer Tracy in “Judgement at Nuremberg” & Audie Murphy in “No Name on the Bullet”. I remember it playing "The Minx" rated X and Raquel Welch in a feature I cannot recall "The Oldest Profession". It was closed on November 30, 1974 with Terence Hill in “My Name is Nobody” & Dennis Hopper in “Kid Blue”.

NYozoner, what used to be called Hwy 183 is now called Hwy 10, so saying the Mid-Cities Drive-In was located on the north side of Hwy 183 is correct – trying to google-map to Hwy 183 would now be a problem.

@NYozoner: I should’ve said the south side of the highway, judging from your historical aerials link. GoogleMaps photo in the header should be re-oriented 180 degrees.

I just found a photo of the Mid-Cities Drive-In Theatre on Flickr, courtesy of the Euless Historical Preservation Committee. It’s at the following url:

AMAZING! When my late mother and I moved to the Mid-Cities in 1976, the theatre was already closed (which is confirmed by the Fort Worth Star-Telegram archives), and all that was left was the broken and weathered marquee at the entrance along old Highway 183 (now Highway 10).

I’m curious, but would anyone have a picture or remember the appearance of that old marquee? I seem to remember that it was up until about 1980, when it was demolished. A BIG THANK YOU to the Euless Historical Preservation Committee for posting the pic!

This Euless history picture is not a picture of the construction of the Mid-Cities Drive-In! The Mid-Cities did not have a screen tower—-it had a corrugated metal screen held up by large poles! The screen was at the back of the lot and could barely be seen from the highway. The caption read built in 1950—-could this be the Belknap Drive-In in Haltom City? Although it opened in 1948, the screen tower in the picture could very well pass for the Belknap. The Mid-Cities was probably Euless' first and only drive-in.

jamestv, I’m now wondering if the photo on Flickr is the Mid-Cities. Based on your above statements, and photographic evidence from Historic Aerials, the pic may be of another drive-in theatre. I have a hunch about which one it might be, but I’ll have to do some more research on it before I give my answer. In the meantime, a pic of the Mid-Cities goes on.

I commented a few years ago about the opening date of the Mid-Cities—-it did not open in the spring of ‘62 but in August '62. Judgement At Nuremburg opened downtown at the Hollywood Theatre first-run in June.