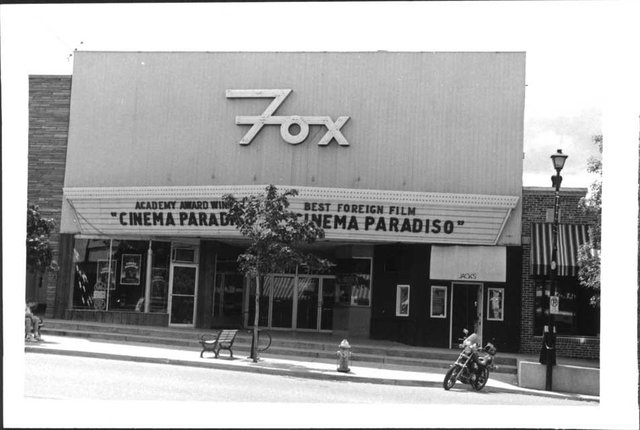 Built in 1926 as the Rialto Theatre, it closed around 1930. There was a Fox Theatre located on 14th Street which was destroyed by fire in 1961. The owners took over the former Rialto Theatre and after some renovations were carried out to the plans of architect Mel C. Glatz, it reopened as the Fox Theatre. The Fox Theatre is now a live venue for concerts.

I think the Fox is either a little Art Deco or Streamline Modern. I’ve been to shows here twice, once in 2001 and once in 2005. Right in downtown Boulder, near all the colleges. It’s all carpeted inside with a bar in the back and nice metal, faux brass railings with a dance floor. I don’t remember if there was a balcony, I think there’s one. The proscenium is impressive and the stage is state-of-the art with exceptional sound and lights.

They do have landmark status.

The owners of this nightclub originally opened their bar in the basement of the Rialto/Fox theater:
http://tinyurl.com/39vuua

The bar in the picture posted “Ken MC” is actually next door to the Fox theater.

The sometimes infuriating Boxoffice Magazine published two articles with conflicting stories about this theater. On June 12, 1961, an article said that the new Fox would occupy the former Rialto Theatre building, which had not been used as a theater “…for more than thirty years.” If that’s true, then the Rialto didn’t last very long. The article also says that “The previous Fox Theatre was a downtown showplace destroyed by fire last April.”

Then the August 14, 1961, issue of Boxoffice said that the Fox Theatre, opened the previous month, had been built on the site of the Rialto, which had been destroyed by fire. I don’t know which article is accurate- assuming that either of them is accurate.

The August article goes on to say that the new Fox was “…designed by Mel Glatz, Fox construction engineer, assisted by Les Newkirk, city manager of Fox Theatres here.” Apparently Mel Glatz later left Fox and set up on his own. In a couple of later issues of Boxoffice, I’ve run across references to him as a “theatre consultant” credited with other theater designs.

I’ve also come across references to other old theaters in Boulder that are missing from Cinema Treasures, but can’t find addresses for any of them. There was an Isis Theatre, opened about 1929, remodeled in 1949. A 650 seat Varsity Theatre was opened by Fox Intermountain in 1941, then closed for nine years beginning about 1961, and then was remodeled and reopened as the Boulder Art Cinema in 1970. A Flatirons Theatre was opened in 1950 or 1951, and was still operating under that name in the mid-1970s.

A Motorena Drive-In was open as early as 1951. In 1967, an 800 seat house called the Village 70 opened in the Arapahoe Village Shopping Center. Three auditoriums, with 400 seats each, were added to it in 1977. Also in the 1970s, Highland Theatres was operating a theater called the Holiday Twin, which may have been a single-screener when they bought it in 1966.

In addition, I came across one reference to a United Artists Regency Theatre, a downtown house which was taken over by an independent operator in 1968. I wonder if either the burned Fox or the UA Regency was the Isis Theatre, renamed?

The original Fox theater was just south of the Boulder theater on 14th Street. It was operated by the same chain that ran the Boulder, and usually showed the second string features or sometimes would continue first run features after they had opened at the Boulder. The Fox was demolished in a fire in 1961, and only the marquee and sign remained; so the management moved both to the old Rialto Theater on University Hill, which they reopened as the “New” Fox. It now is a venue for live performances. The Boulder Art Cinema was on Pearl Street between 13th and 14th. I was in high school when the Fox burned down, and in college when the Art Cinema was open (although I think it was before 1970 – maybe in the late 60’s?)

Thanks for the clarification, Steve.

Pardon me for all these long links.

The Art theater was originally the Varsity theater.
View link

The Fox took over the original Tulagi building in 1950. Here’s a story about the bar and it mentions early history.
View link

I hope this helps clear a little up.

Thanks for the photo links, CapnRob. They do help clear things up.