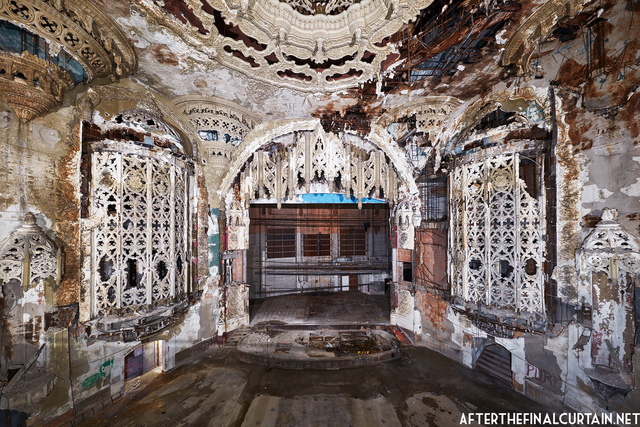 The United Artists Theatre in Detroit was the third U.A. Theatre designed by C. Howard Crane. It was built in 1928, after the Los Angeles and Chicago United Artist Theatre’s.

All three were designed in the Spanish-Gothic style, and were very similar in many respects, but the Detroit UA also had some major differences. First off, a thirteen story office tower was built on top of the theatre, to allay initial fears that it could be a white elephant.

Crane was faced with an irregular-shaped lot, but made the best of it, giving the UA a round lobby, with a domed ceiling, gilded Art-Deco inspired Indian princesses on the walls, between wall-length mirrors. A marble staircase led up to the mezzanine and balcony levels.

The 2,070-seat auditorium, which was said to be nearly acoustically perfect, was fantastically decorated, with Gothic plasterwork, more gilding, metal-work, and brass light fixtures like something out of a Medieval cathedral.

The Detroit UA Theatre was definitely more dramatic and breath-taking than either of the United Artist theatres Crane had previously done.

Opening night on February 3, 1928 featured the Gloria Swanson hit “Sadie Thompson”, with the star herself on a phone hook-up addressing the full house and opening the curtains for the first time.

Originally, the theatre also had an in-house orchestra and the occasional stage show, but was really one of the city’s first major houses designed primarily for films. It was equipped with a Wurlitzer 3 manual 17 ranks organ.

It also once featured reserved seating, such as when it hosted the Detroit premiere of “Gone With the Wind” in 1939.

For several years in the 1940’s, it was acquired by United Detroit Theaters, but in 1950 was again run by United Artists. It became the first Detroit theatre to feature Cinemascope (with 1953’s “How to Marry a Millionaire”) and also the first to get 70mm, three years later, with “Oklahoma!”.

A major remodeling took place in the early-1960’s, which removed the 4-story marquee, and replaced it with the current, unattractive one. Also, the stately façade, with its arches and terra-cotta work, was lost under a covering of dark, featureless marble up to the office tower. Its lobby also received a similar facelift, covering up much of its spectacular décor and its dome was covered by a dropped ceiling.

However, the UA did have something of a revival during the early-1960’s, having long runs of such blockbusters as “The Sound of Music” and “Tora, Tora, Tora”. This turned out to be a short-lived revival, and by the end of the decade, the United Artists Theatre was screening adult fare.

In 1972, it was renamed and reopened as the Downtown Theatre, but closed in 1974, for good this time.

A year later, its furnishings and remaining artwork were auctioned off, and in the mid-to-late-1970’s was used by the Detroit Symphony Orchestra for recording. By the mid-1980’s even the United Artists Tower office building had closed, its tenants having moved to the suburbs.

Since then, there have been plans to restore the United Artists Theatre as a nightclub or movie theatres, but every time these plans have fallen through. In the meantime, the theatre has unfortunately fallen into serious disrepair, its once stunning décor all but gone, and its exterior literally crumbling away (cars parked in front of the building were damaged in 1989 when some brickwork collapsed on the upper stories and fell to the ground).

In the late-1990’s, the theatre was stripped of anything remotely salvageable, and today continues to sit vacant and in a state of near ruin. In January 2018 work began to rehab the former office tower into residential units, with retail units at ground floor.

What’s going to happen with the theater itself?

Just posted about The United Artists on After the Final Curtain It was one of my favorite places to photograph.

Thank you for posting Matt. Always loved your Granada in Chicago photos.

David – You’re welcome, but you must have me confused with another photographer re the Granada. I was 7 when it was demolished.

Ah, my mistake. It was Mekong.net.

A wall has collapsed at the building. I’m guessing this will speed up the expected demolition.

While the office building with the lobby is being renovated, the theater itself is being demolished.

Sad, considering that downtown Detroit has started to turn the corner. The rehab of the Michigan Central train station is a good example of that.