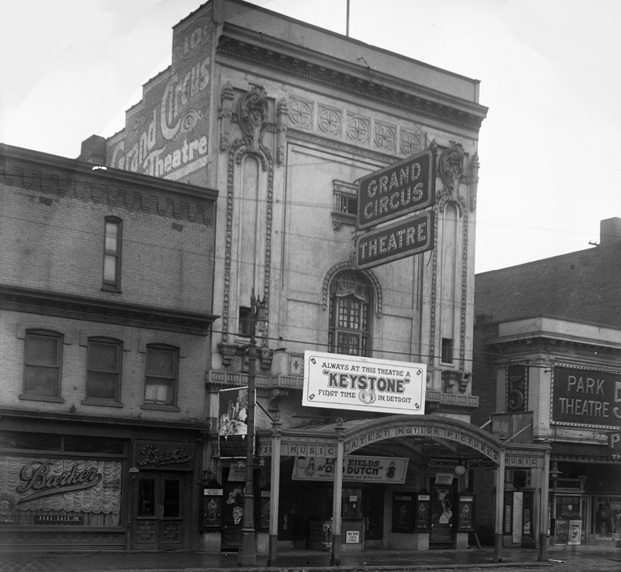 I agree to leave this theatre as it is too. After all it, it has now been stated here that it was located where the State Theatre was built. I have just mentioned that on the State Theatre page: /theaters/241/

The above information is wrong.The Grand circus is very much alive and wonderfully restored as the Mich opera theater at the Detroit opera house.The location as listed above is also wrong.The theater is located on Grand circus pk at Witherell and Madison about one block east of the State theater which was originally called the Palms theater.
The Grand circus was originally named the Capitol theater.During the 2nd world war it was open 24 hrs a day and would run movies all 24 hrs.Likely this was to accomodate the war time factorty workers in and around Detroit.45,000 people would patronize the Capitol theater on a typical week end.
Later it was renamed the Grand circus where movies wer shown up to the 1970’s.The theater then fell on very hard times until recused by a gentleman from the Mich opera.The Detroit opera house as it is now known has undergone considerable restoration with great care taken to bring it’s original splendor back as much a possible.This is quite remarkable as the theater was in horrible condition, an example being the piano was floating in several feet of water in the orchestra pit.
The state theater has had all the seats on the main floor removed and tables have been put in.However the rest of the theater including the balconies is intact and is used for concerts and other events.
The owner of the State is Chcuk Forbes who has been active in saving Detroit landmarks.

Chuck1231 is correct, grandcircus is wrong—The “Grand Circus” he is thinking of is a later name for the Capitol/Broadway Capitol/Paramount/Grand Circus/Opera House on Broadway.
The old Grand Circus sat on the site currently occupied by the State/Palms State/Palms/State/Club X/Fillmore, which stinks like stale beer 24/7/365, a nice house outherwise, and one of Chuck Forbes' wonderful accomplishments.