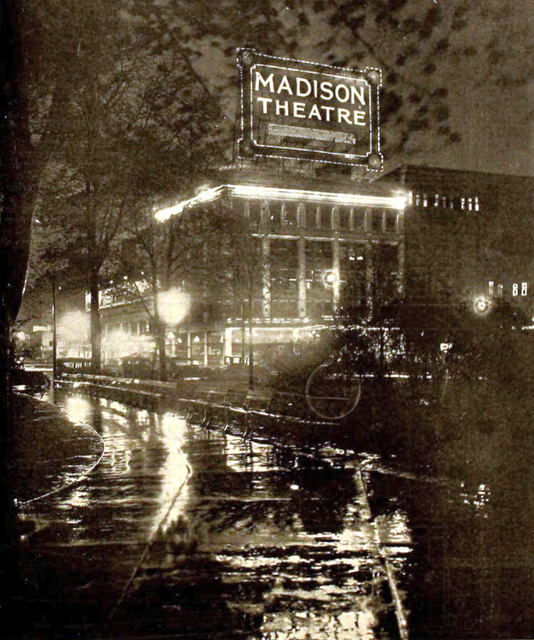 When the Madison Theatre opened March 7, 1917, its $500,000 cost was one of the heftiest yet for a theatre in downtown Detroit. Built for the Kunsky circuit and designed by architect C. Howard Crane in an elegant, understated Neo-Classical style, it could seat over 1,800 and was then the largest of the theatres in Detroit’s former theatre district, Grand Circus Park.

As with many theatres of the 1910’s and 1920’s, it was built along with an office tower, in case moving pictures were ‘just a passing fad’ and no longer profitable.

The Madison Theatre was surrounded by a five story office building with a façade covered in terra cotta decoration in a classical motif. Other than a small, relatively simple marquee (removed in the 1960’s in favor of a larger and tackier one), the Madison Theatre could pass for a typical office block.

The top floor of the Madison Building housed the Kunksy circuit’s main offices when it first opened.

The Madison Theatre also enjoyed immediate success, opening with the film “The Poor Little Rich Girl” starring Mary Pickford. Its features included gilded plasterwork in the auditorium and lobby spaces, including a frieze of maidens over the stage’s proscenium arch and a tiered orchestra pit. It was equipped with a Hilgreen-Lane organ.

By the late-1920’s and early-1930’s, several larger and far more ornate palaces had joined the Madison Theatre on Grand Circus Park, such as the Capitol Theatre (just across the street), the State Theatre, the Fox Theatre and the United Artists Theatre, but the Madison Theatre continued to remain a popular venue for many more years.

In the 1940’s, Kunsky sold the Madison Theatre to United Detroit Theaters, which had the theatre drastically remodeled in 1961, destroying the original Neo-Classical style facade with a drab 1960’s one. Fortunately, the interior was left mostly intact.

In 1960, the theatre switched over to 70mm film, with “Spartacus”, which had a long run, but nowhere near as long as the almost two-year run of “The Sound of Music” beginning in 1965.

By the late-1970’s and early-1980’s, the Madison Theatre had begun to decline, and in addition to horror and action films, was hosting rock concerts on its stage in order to help keep the theatre open.

However, this wasn’t enough. In 1984, the Madison Theatre was shuttered, its last film, ironically, was Christopher Walken in “The Dead Zone” (which remained on its marquee for a long time after it had closed).

In the 1990’s, the Michigan Opera Theater, which purchased the Capitol Theatre to remake it into their new home, also acquired the Madison Theatre and announced plans to restore it for use as a performing arts center, but were ultimately unable to raise enough money. It was sold to a developer in 2000 who intended to replace the theatre with loft units (though the Madison Building behind the theatre would remain).

Though in poor shape (a victim of heavy water damage and decades of neglect), the Madison Theatre was still restorable, but nevertheless the auditorium was razed in 2001, with the marquee the only piece to show the building housed a theatre.

After demolition of the theatre auditorium and gutting of the building, it stood empty for a couple years before finally changing owners. Construction began mid-2005, finishing the building with a new infill façade designed by the Kraemer Design Group. A temporary bar was housed in the building known as “Madison’s On Broadway.” A permanent bar is set to open after more work is done in the building.

Jeff VA, Yes “Woodstock” premier, was at the Maison. JerryD

Terrific info and pictures, I was a projectionist here back in the early 80’s. Mostly karate flicks and horror films. Great memories, and I’m happy to have had an opportunity to work in an old movie palace.

Yes Woodstock did show at Madison. I was an Asher there. Woodstock appeared for 26 weeks then came back for another 15 weeks. I so met a very nice girl name barb and her bother was one of the asst. managers there. I would love to hear from her.

“The Sound of Music” premiered at the Madison 50 years ago today. With a reserved-seat run of 98 weeks, do you think it is the long-run record holder for this venue?

In the late 60’s-early 70’s until the mid-70’s, ABC Theatres owned and operated the Madison. I recently saw a 1971 newspaper clipping that advertised the Madison – with the ABC logo in the ad – showing a United Artists double feature of Allen Funt’s What Do You Say to a Naked Lady and the original Thomas Crown Affair.

A post with the history of John H. Kunsky and 9 photos of various theatres from the D Tour 313 Facebook page.