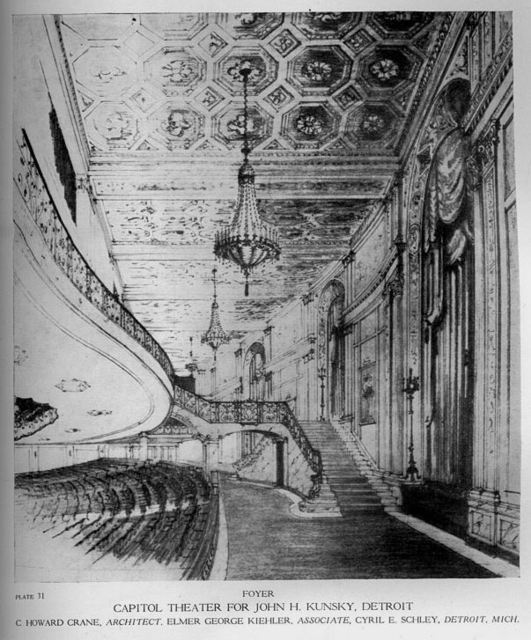 The Capitol Theatre was considered Detroit’s first official movie palace, and when it opened January 12, 1922, it sat about 3,500, the fifth largest ever built in the US at the time.

Its architect, C. Howard Crane, designed the Capitol Theatre in the style of the Italian Renaissance, and its facade, with its soaring Corinthian columns, loomed over Broadway like a royal palace. Its interior was even more ornate, with several kinds of marble, Tiffany mosaics, sculpture and gilt decorating its lobby and other areas. The Capitol Theatre is said to have cost over $2 million to build.

The 35-piece ‘Great Capitol Wonder Orchestra’, led by Eduard Werner, was on hand opening day, and remained a popular feature of the theatre until he left the Capitol Theatre for the Michigan Theater in 1926. On screen, “The Lotus Eater” was shown, as well as footage of guests entering the theatre two hours earlier, much to the audience’s amazement and delight.

The theatre’s name was changed to the Paramount Theatre on August 30, 1929, when it was taken over by the Paramount-Publix chain, and featured live stage shows and vaudeville acts. Stars who appeared on the Paramount Theatre’s stage in those days included W.C. Fields, Fatty Arbuckle, and Guy Lombardo and his Orchestra.

As a result of the Depression, the theatre closed in 1932, but only until August31, 1934, when it reopened under United Detroit Theaters with another new name, this time the Broadway-Capitol Theatre.

In the 1940’s and 1950’s, management of the theatre passed back and forth between various parties, but it was managed by United Detroit Theaters once again beginning in 1960.

For most of the 1950’s, the Broadway-Capitol Theatre featured second-run films and double-features, and unlike many other area theatres, did not convert to the widescreen format to attract audiences.

It was in 1960 that United Detroit Theaters poured over $100,000 into remodeling the theatre, completely changing its facade and slightly reducing its seating capacity.

It was also given yet another new name on December 23, 1960 when it became the Grand Circus Theatre, continuing to screen second-run films. The theatre often struggled during the 1960’s and 1970’s, but remained open until 1978, with the last film on its screen being “Jailbait Babysitter” starring Therese Pare.

During the early-to-mid-1980’s, the Grand Circus Theatre was used for concerts, but was forced to close in 1985 after a fire broke out.

In 1989, the Michigan Opera Theatre purchased the Grand Circus Theatre and nearby Madison Theatre for $3.5 million and began a $20 million campaign to restore the interior of the old Capitol Theatre to its 1920’s appearance, enlarge its stage, improve the sound and lighting systems, and reduce seating to a more comfortable 2,700.

It now serves as the Detroit Opera House.

“This has been the sole venue for all of the Michigan Opera Theater Productions”? Not by a long shot. Since its first full length production in 1970 until it moved into its present location in 1996, the Detroit Opera Theater performed in a variety of Detroit venues including the Detroit Institute of Arts, the Masonic Auditorium, the Fisher Theatre, and most especially, the Music Hall, which was its home for many years and was the first former movie theater that the DOT restored and saved from demolition. Whoever wrote that Detroit History article is very misinformed.

Also, that picture above is a little misleading; it shows really what is the rear wall of the theater, part of the new stagehouse that was part of the renovation of the former Grand Circus into the Detroit Opera House.

The tragedy though, is that so many other once nearby similarly grand palaces – especially the Madison, the Michigan, the United Artists, and the Adams – are either gone or probably beyond rehabilitation.

Detroit Theatre lovers – I am looking for any information on C. Howard Crane’s archives which I believe were once held by architect Louis E. Wiltse. If anyone knows how to find Wiltse or the archives please let me know. Thanks!

bethg: You may have already discovered this, but Maria DiChiera did her Master’s Thesis at the University of Pennsylvania in 1992 on the theaters of Crane (it is available online here. Her work extensively cites Wiltse’s archive. I think it is likely that she is related to, possibly the daughter of, David DiChiera, the Director of the Detroit Opera Theater. Possibly you might be able to locate her through the MOT Director’s office, and she may know how to locate Wiltse or where the archives might now reside.

Wiltse’s offices were at 6300 Shasabaw Rd. in Clarkston, MI. His company is dissolved, but perhaps, if the building, which houses a number of professional offices, is still under the same management that it was at the time when Wiltse was there is still in charge or retained records, they might be able to help. I am sure one of the existing tenants could tell you how to locate the management.

Thank you CSWalczak! I am an employee at the Fox Theatre in Atlanta.. and we are much like your lovely Fox in Detroit. I did come across Ms. DiChiera’s work.. and realized that Mr. Crane had records on our theatre! Crane was brought in to assist the original architect of our theatre- Olivier Vinour after William Fox took an interest in the auditorium the Atlanta Shriners were building. It was with Mr. Crane’s help that our humble shrine became a great Fox Theatre. Thanks again!

According to the website http://barton.theatreorgans.com/ the Capitol opened with a 3 manual, 38 rank Hillgreen – Lane pipe organ. It seems very odd that a theatre of this quality should have had an organ from a distinctly second (if not third) tier organ builder. If the website is correct and the original cost was only $8000, I wouldn’t be surprised if some of the chandeliers in the theatre didn’t cost more than the organ.

David DiChiera, who was chiefly responsible for transforming the original Capitol into the Detroit Opera House, has died at age 83. News coverage here

Slight correction to the overview. During the 1950s, the Broadway-Capitol showed many first run films, mostly drive-in type movies like science fiction (Creature from the Black Lagoon, I was a Teenage Frankenstein), crime (The Big Combo, Beyond a Reasonable Doubt), and exploitation (Women’s Prison, Hot Rod Girl). Towards the end of the decade, it hosted the Detroit premiere of many American International Picture movies like Hot Rod Gang and Attack of the Giant Leeches. The Palms had similar programming at that time, and both theaters provided entertainment for second shift workers with all-night programming. (All information from the Detroit Free Press archives on Newspapers.com)