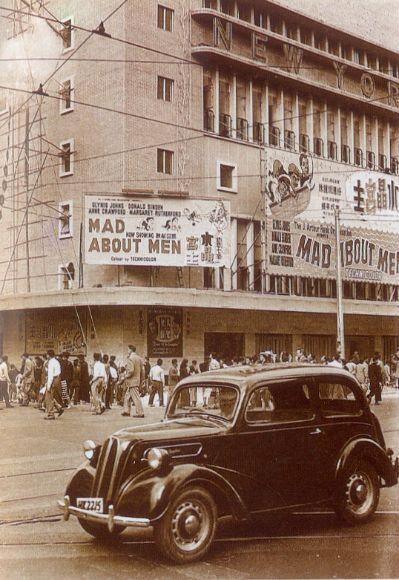 The New York Theatre was situated in the Wanchai district on the Hong Kong Island. It was at the corner of Percival Road and Hennessy Road. It opened to business on 23rd January, 1955 with “Mad About Men”.

There was a free car park on the ground floor for patrons.The auditorium on the first floor of the theatre building was well designed and the sight line was perfect. The patrons of the dress circle were served by a lift.

In the early-1960’s, the free car parks had been closed and boarded up at an unknown time.

In the early-1970’s, the closed car park was renovated as shops.

The theatre showed first-run English language, Japanese language, and Chinese dialect films until its closure on 1st May 1982.

New York was paired up with Empress in Mongkok in the 80s before it’s closure.

and this is a better/older one:
View link