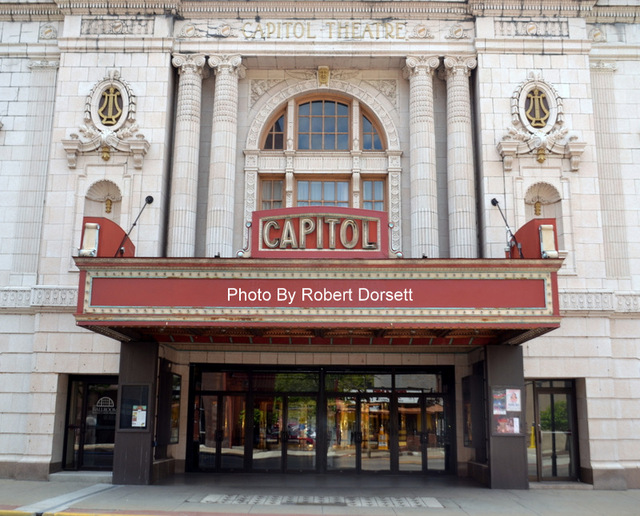 The Capitol Theatre opened on Thanksgiving day 1928 at a cost of $1,000,000.00. The architect was Charles W. Bates of Wheeling, and R. R. Kitchen was general contractor. The building was constructed to support a planned eight-story hotel which was never built. A large copper marquee with electric and neon sign graced the entrance.

The auditorium originally seated nearly 3,000. The side walls were divided into large panels with borders and silken fabric. Primary color scheme was mulberry, delicate green tones, ivory and various shades of golden russet. There were two balconies, as well as three projectors: one for silent films, one for sound, and one for emergencies. Attractive sculpted figures graced the 44-foot wide proscenium. The ceiling lighting fixtures measured eight feet in diameter and contained hundred of amber color prisms and diffusing bowls. The lobby had two box offices, as well as Cylinder type lanterns with prism head lighting fixtures. The theatre had a $50,000.00 Marr & Coulton 4 manual 17 ranks organ which was built in Warsaw, NY. The auditorium remains intact and largely unaltered, albeit needing some renovation and with some urgent fire code violations to address, which are forcing its imminent closure.

The theatre presented movies and stage shows, and the Wheeling Symphony Society moved into the building in 1929 and the Jamboree presented its first show at the theatre in 1933. Both eventually moved out, the symphony leaving because it felt movie presentations would detract from the symphony performances.

The Capitol Theatre stopped showing movies years ago, but the venue saw major success as the Capitol Music Hall, and the symphony returned to the Capitol in 1961. In 1969, radio station WWVA moved their studios to the Capitol building and used it for broadcasts of the WWVA Jamboree music shows, which drew patrons from the entire tri-state area. The Jamboree attracted many top country music stars including Charley Pride, Loretta Lynn and Johnny Cash.

Eventually purchased by Clear Channel and recently sold to to Live Nation, the Capitol Building included a recording studio, ballroom and shop, as well as Clear Channel’s other five radio stations in the region.

Although the theatre was busy, the business gradually declined over the years, and the theatre needed renovation. The Jamboree was increasing its focus to outdoor concerts and performing artists increasingly sought bigger venues.

In the spring of 2007, the Capitol Theatre was hit with a list of fire code violations after its annual safety inspection. Analysis indicated that the theatre needed at least two million dollars in work to renovate and address the code violations. In May 2007, Live Nation put the building up for sale for $850,000, and the building expected to close by May 18, 2007.

A coalition of local business leaders and the Chamber of Commerce worked together to develop a business plan for saving the theatre. After a restoration, it reopened on September 23, 2009.

Contributed by David A. Litterer
Get Movie Tickets & Showtimes

The story of 3/15/08 states that the city has pledged 2,500,000 bucks towards the renovation of the capitol, but that the tax-increment financing plan cannot be used if a private entity buys the building. But it appears the city is very interested in getting it reopened, calling it vital to the redevelopment of downtoan.

Anyone know what happened at the hearing referenced in the above article?

The facade of this theater is spectacular. The citizens of this town would be out of their mind to let a theater like this slip through their fingers.

According to the Pittsburgh Post-Gazette. The theater has been sold to the Wheeling Visitors Bureau and will be brought up to code. Great News.

renovation is soon to begin!!..unfortunately the local newspaper and many residents present a pessimistic mindset toward revitalizing this great building

The Capitol is having a gala reopening following an $8 Million Dollar restoration tomorrow evening 23 September 2009.

There will be a big live show and free tickets are available today.
Go to Ch. 7 link for video:http:
www.boomboxradio.net/boombox/PlayerSetup/Players/WTRFPlayer.aspx?FileId=209613_wtrf

Here are two pictures from March 2010.