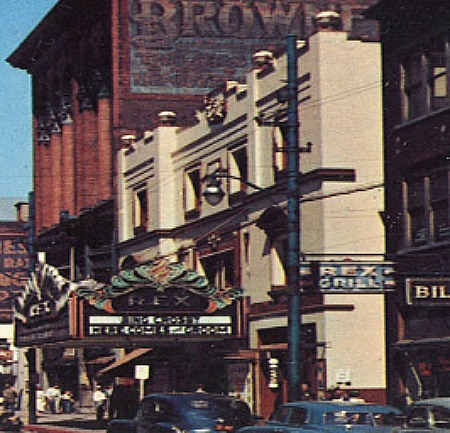 A prominent movie house in Wheeling, West Virginia, the Rex Theater was opened in 1915.

On August 30, 1924, the new Paramount Zane Grey western epic “Wanderer of the Wastelands” opened. It was the first western feature picture to be shot entirely in the two strip Technicolor process. Cost was subsidized by Technicolor which allowed Paramount technicians to do the filming using proprietory equipment to prove that the process was easy to employ.

The camera used a prism splitter after the lens to allow two strips of film to be exposed at once, one with a green filter, one with a red filter. The two strips were developed and mated with adhesive to form one thicker strip.

From the google photos and the postcard it looks as if the Rex has been demolished. Replaced by a small single story retail building.

Looks like the new one-story place is Wheelng Office Supply. The following view approximates the 1951 view above.

The January 28, 1915, issue of trade journal Iron Age noted that the J.E. Moss Iron Works had closed a contract to supply 100 tons of structural steel for the new Rex Theatre at Wheeling.

From the Ohio County Public Library, here is a 1937 photo of the Rex.

A 1936 flood sent several feet of water along Market Street, nearly reaching the underside of the marquee of the Rex, as seen in a photo in “The Great Ohio River Flood of 1937” by James E. Casto (Google Books preview.)

From 1962 until 1965, the Rex was the venue from which station WWVA broadcast its weekly live music program, WWVA Jamboree. This web page features photos of the various venues that hosted the Jamboree over the years. The page also says that the Rex was known briefly as the Coronet Theatre, and that it was demolished in the early 1990s.

An ad for the Carey Roofing Company in the May, 1918, issue of The Architectural Forum lists the Rex Theatre in Wheeling as one of the building using its products. It also names the architect of the Rex as Edward Franzheim.

Linkrot repair: The 1937 photo of the Rex Theatre can now be seen here.

Also, this 1981 photo from American Classic Images shows the Rex in its last days, when it had been given an aluminum false front and renamed the Coronet Theatre.