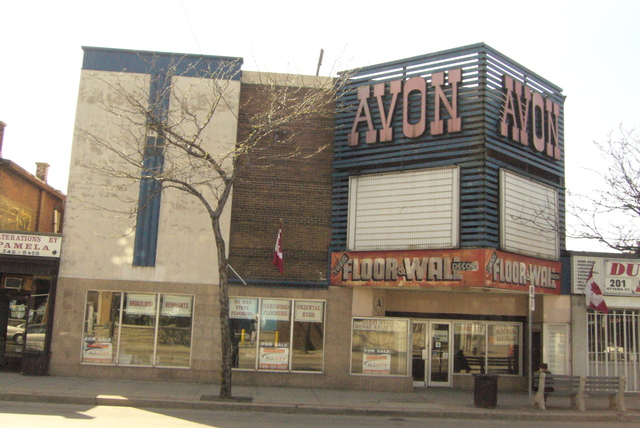 The 770-seat Avalon Theatre opened in 1941. In 1969, it was renamed the Avon Theatre. The theatre was owned by United Amusements which was later taken over by Famous Players. It closed March 22, 1987 with Sylvester Stallone in “Over the Top”. It is now used for retail.

A picture of the Avon as it was in 1966 from the Ontario Archives:

The Avalon was renamed the Avon prior to l966 (see 1966 archive photo, and the film showing is “The Trouble With Angels”). The theatre may have been taken over by Famous Players or 20th Century in 1969.
It was more of a neighborhood theatre originally, but later was a first-run house. “…Virginia Woolf?”, “Love Story”, “A Clockwork Orange”, “A Star Is Born”…just a few that played there.

The Avon still looks the same inside as it does in the lovesickphoto 2007 pictures. The interior is probably most of the original Avalon design. Some Avalon exterior detail still exists. The vertical line (relief) on the left side is the same (minus the air vent above the display window), as is the exposed upper brick work. Immediately under the marquee, the pink-colored tile dates back to 1941, with the “A” for Avalon. The terrazzo, from the sidewalk to the entrance doors is still there. A portion of it (to the left) was covered or removed with the addition of the windows. If you look at the 1966 and 1982 photos, most of the exterior is the Avalon original (except for the Avon marquee).

The name of the business occupying the Avon is Twins Floor and Wall Decor. A note on the door states “by appointment”. I visited here in January 2010, and then the owner said he wanted $500,000 for the place. He’s still there.
For more on this and other Hamilton theaters, see “Glamorous Ghosts”, an article by John Sebert in Hamilton Magazine. www.hamiltonmagazine.com/sitepages/?aid. There are some great photos I had never seen before.

A recent Spec article dealing with this part of town (and the notion of somehow ‘resurrecting’ The Avon) prompted me to post an article on one of my community activism blogs:

This theatre was just an old Twinex house — and they used to play a lot of the Disney product there. It was nothing special — the last time I was there would have been in the late 70’s!!!

I have a Hamilton Spectator with an Avon ad for “The Trouble With Angels”. It is dated Friday, July 22, 1966. The ad states “3RD. WK.”, so I assume the above archive photo was taken during the week of July 22-28, 1966. The Avon was a 20th Century Theatre at this time. The phone number is 545-1201, and the address is given as OTTAWA ST. N. AT CANNON. The theater “signature”, in the ad, has the AVON name in the same style as it is on the marquee.
The Avon continues under the 20th Century chain, in the July 3, 1967 issue of the Spectator. In the Monday, February 1, 1971 Spectator, the Avon ad is grouped under the “Famous Players & 20th Century Movie Guide”. This continues until a September 1978 issue. Eventually, the 20th Century logo disappears, and it appears that Famous Players is the sole management and/or owner in the Spectator dated Monday, October 15, 1979.

The last ad I have, previous to the Avon/“Angels” one, is in the Spectator of Monday, August 30, 1965. The theater is called the Avalon and is a Famous Players theater. The movie playing is “In Harm’s Way”, and it is showing at the Tivoli, Avalon and Skyway Drive-In. Most previous movies were shown at the same three theaters (Downtown, East and the Drive-In).

The theatre building was sold April 2014 and is going to be turned into an antique mall.