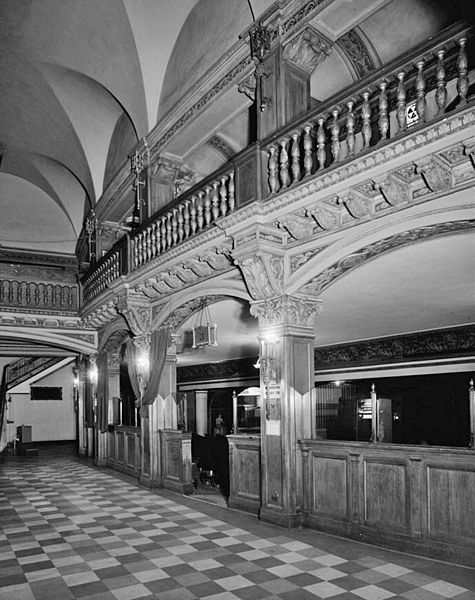 The Riviera Theatre, or Grand Riviera Theatre, as it was first called when it was opened on August 24, 1925, was designed by John Eberson. It was built in an Atmospheric/Italian Renaissance style, and resembled a palazzo, complete with a spectacular auditorium decorated to look like an outdoor courtyard. It was equipped with a Robert Morton 3 manual 10 ranks theatre pipe organ.

Its soaring grand lobby was equally stunning, complete with a grand marble staircase and not one but three great arched windows over front doors. A four-story vertical marquee spelled out the theatre’s name boldly over Grand River Avenue.

The Grand Riviera Theatre opened with Coleen Moore in “The Desert Flower”. Within a couple years, it was wired for sound. In the early-1930’s, the ‘Grand’ was removed from its name-though it was no reflection on the beautiful theatre itself-and was from then on known as the Riviera Theatre.

Unfortunately, one of Detroit’s most unique movie palaces was demolished in 1999. Since August 2001, the site has been occupied by the Detroit Grand River Social Security Office.

The Tulsa Ritz (also an Eberson design) had an identical mezzanine drinking fountain, along with the same cast statuary and urns from Michael Angelo Studios.

I would love to get a spapshot of the spiral staircase in the lobby of this beautifu;l theater, my mother and father worked here in ‘53 as usher/usherette and this is where they met 50+ yrs ago!! I hope that someone can halp.

No doubt about it, no one does ruins better than Detroit.

Looks like it had seen its better days in the Motor City.

From the 1920s a postcard view of the Grand Rivera in Detroit.

My Grandmother Laurine(Bowen)White was the Manager of the Riviera Theatre. And my mother Patricia White and aunts Sue and Faye also worked for the theatre along with my uncle Richard. Before it became a motion picture theatre they hosted Broadway musicals like “My Fair Lady” with Judi Garland. I know that the first time my mother ever met Jerry Lewis, she accidently walked into his dressing room to find him in his boxer shorts.lol My mother Patricia said she the theatre was her second home, she spent so much time there. She worked the concession and whatever else my Grandmother needed her to do. When my grandmother was alive, I remember her telling stories about Miss Judy Garland, and other actors like Jerry Lewis. I have told my mother of this site in hopes she can tell a few stories and share some old memories. Now that she see’s my comment she probably will. I can picture my grandmother running that place. She was a tiny petite lady, but what a pistol. I’m proud to of taken after her:)

I was born and raised on Ravenswood st. one block from the Riviera Theatre. My mother Laurine (Bowen) White started work at the Riviera during WWII as secretary and bookkeeper. She was promoted to Manager in 1949 and remained in that position until until 1960 when the beautiful Riviera began to decay. I, and my three sisters practically lived in the theatre. It gave my wonderful mother the means to raise four children and keep them out of trouble. I had the opportunity to meet the great Judy Garland. To watch backstage as the cast of Damn Yankees and Lil Abner ran about changing costumes and getting ready for their next scene. As a bonus, my Aunt Kathryn was supervisor of the concession stand. No children ever had it better. Free shows and popcorn. I will always fondly remember the Riviera Theatre.

As a baby until I was about 9, I lived on Yosemite, then moved to a house on Nardin Park.From the age of 6 or 7 until I turned 15 I went to the Riviera Theater every weekend (circa 1951-1960). So I probably bought candy at the Concession Stand from the Bowen ladies. Such a shame that a beautiful theater closed and has deteriorated.

I still remember the beautiful upper balconies and the majestic stairway that led to the upper level. Have many great memories of seeing all the Roy Rogers/Dale Evans movies along with “Tammy” with Debbie Reynolds, Greensleeves (paid an extra 10 cents). Back then a double feature movie with cartoons cost a quarter. Also “Summer Place” with Troy Donahue, Sandra Dee and Dorothy McGuire which popularized the beautiful Percy Faith song ‘Theme from A Summer Place.’ I had a cousin who worked as an usher and filled in at the concession stand around 1953-1954.

The Riviera Theater is forever etched in my mind and I have thought about this place often. First time on this site. Googled my old homes, and they are gone — demolished. So Sad!!!!!

Wow miss this theater.. My mom and aunt and her daughter my first cousin would go to the movies then walk across to Woolworths retail store and eat pizza across the street at Famous pizza