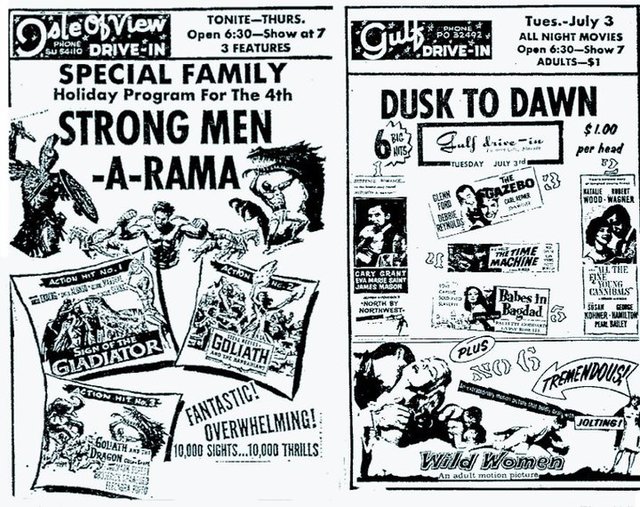 The Gulf Drive-In opened on February 26, 1954, with the 1953 western “Escape From Fort Bravo” with William Holden, Eleanor Parker and John Forsythe. It was opened by Martin Theatres from Columbus, GA. At this time Martin would be operating the Isle of View Drive-In, along with the Ritz Theatre, Panama Theatre and Bay Theatre, all in Panama City. Its parking ramp could hold 500 cars with in-a-car speakers and screening movies on an 84 ft. x 46 ft. screen tower. One of the features of the Gulf Drive-In was a man-made lake parallel to the entrance and exit driveways. Throughout the years, various groups sponsored fishing derbies in the lake from the 1950’s to the 1970’s.

Martin Theatre closed the Gulf Drive-In in November of 1980, so that only left Martin’s Isle of View Drive-In still operating. The closed Gulf Drive-In sat empty and unused for a few years. It was finally demolished and the Life Management Center of Northwest Florida was constructed on the site.

Was mentioned in the documentary “Drive-In Movie Memories” in 2001.

Does anyone have information on the old theatre that once existed on Long Beach Resort that became home to the “Noah’s Arc” before being demolished in the 1970’s? It was located almost opposite of the former Petticoat Junction amusement park on Hwy 98.

Does anyone have pictures of either drive-in? I’m doing a site www.abandonedgulfcoast.com and you’d get full credit for your pictures.

The drive-in on Long Beach was called the Sunset Drive-In.

bassale..the DI on Long Beach was the Wayside DI. It is on CT.