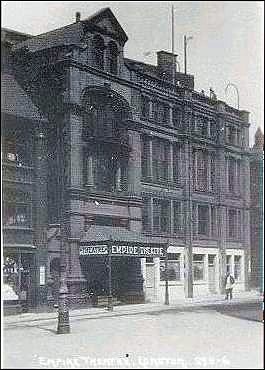 Originally built as the Queen’s Theatre in 1887 (architect John Taylor), the building was destroyed by fire on 28th September 1894.

A new Queen’s Theatre was built on the site, designed by noted theatre architect Frank Matcham and it opened in 1896. Seating was provided in Orchestra Stalls, Dress Circle and Balcony levels and the auditorium was richly decorated. It served as a variety theatre and from at least 1911 films were shown as part of the bill.

In 1916 it was re-named Empire Theatre and in late-1921 conversion was begun to cinema use, when a projection box was built into the roof of the building. It re-opened on 23rd January 1922 with some stage shows taking place, but film use became more prevalent and right up to closure it was always named the Empire Theatre. Taken over by the Regent circuit in 1925, they later became part of Associated British Cinemas (ABC).

At some time the balcony area was sealed off with the insertion of a false ceiling and this reduced the seating capacity to 796. The Empire Theatre closed on 2nd April 1966 with Elvis Presley in "Harem Holiday" and it was converted into an Alpha Bingo Club, later Tudor Bingo Club.

The building was given a Grade II Listed status and bingo continued until 1991 when it was operated by Gala Bingo Clubs.

The Empire Theatre stood unused and plans were going ahead for the Stoke on Trent Repertory Theatre to take over the building and bring it back into live show use.

Sadly, a fire on New Years Eve;31st December 1992 destroyed the building apart from the facade. There was talk about re-building or even keeping the facade in a new development, but it was not to be and the final remains of the Empire Theatre were demolished in Spring 1997.

Another photo as a bingo hall here :–

Some scanned images (interior and exterior) taken in 1989 here:–

I have a complete run of all the programmes shown at the Empire from 1932 to when it closed in 1966.

Oddly enough, although there are photos of the Empire when it was a theatre and, from 1966 onwards when it was a Bingo Hall, there are no photos of the decades when it was an ABC cinema. You’d have thought that ABC would have taken at least one photo of the front of the Empire in all that time, but apparently, they didn’t. There were photos taken of the ABCs Capitol in Hanley; Majestic in Stoke and Cine-Bowl in Hanley, but none of the Empire. The front of the Savoy in Newcastle-under-Lyme would have been impractical to photograph, because the entrance was down a narrow alley way.