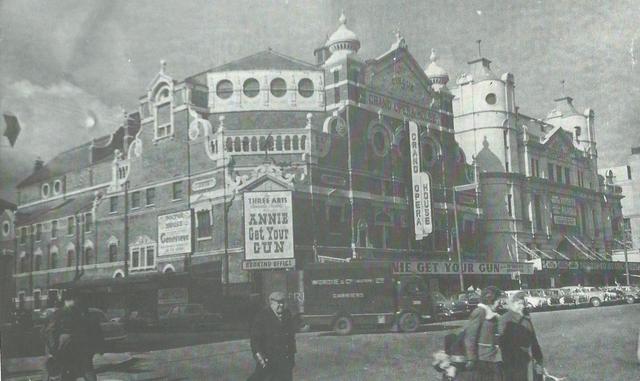 Beautiful and of national importance, this Frank Matcham designed theater was used as a cinema for over 22 years, from 1949 to 1972, despite being almost totally unsuited to the task!

It opened December 23, 1895 and had a chequered career - sometimes very successful - sometimes in iminent danger of closure.

Then in 1949 Imperial Cinema and Cinematograph Theatres took a controlling interest on the Opera House and films became the order of the day - although amateurs and a panto sometimes took back the stage.

Taken over by Rank Organisation in 1960 and for a time it was under threat of becoming a bowling alley! However it was deemed unsuitable and films continued under Rank until they closed and boarded up the building in 1972.

A distinctly Indian theme is evident in the auditorium with elephants' heads and intricate plasterwork on the fronts of the two balconies. Delightful range of ‘onion domed’ boxes either side of the proscenium arch.

Aided by a Grade A Listed building status, awarded in 1974 (the first Belfast building to be so designated) the Opera House survived and in 1975 the long process of restoration began. Re-opening night took place on 15 September 1980.

Despite serious damage from a bomb in 1991 and again in May 1993, which was swiftly repaired, the Grand Opera House continues very successfully and is a symbol of a rejeuvenating city.

It operated as a full time cinema from 3rd October 1949 until April 1972, during which time it operated with a seating capacity of 1,500.

Further renovation and extension to the Grand Opera House, Belfast took place in 2006.

This includes a new starkly modern extension at the side, which includes the cleverly named “Baby Grand” bar and also cafe facilities. This provides the box office and the new usual entry to the complex.

A photo of the Grand Opera House in Belfast, showing the new extension opened in 2006. This photo was taken in January 2007.

I seem to recall that the IRA blew this theater up sometime ago. Anybody have any details or can confirm?

I believe the Grand Opera House has been damaged by IRA bombs on at least two occasions which resulted in its closure. Each time it wasa restored and re-opened. The bombs were not aimed at the theatre itself but occured in the close vicinity.

I prefer the Grand looking like this , without that hideous extension now sitting to its left