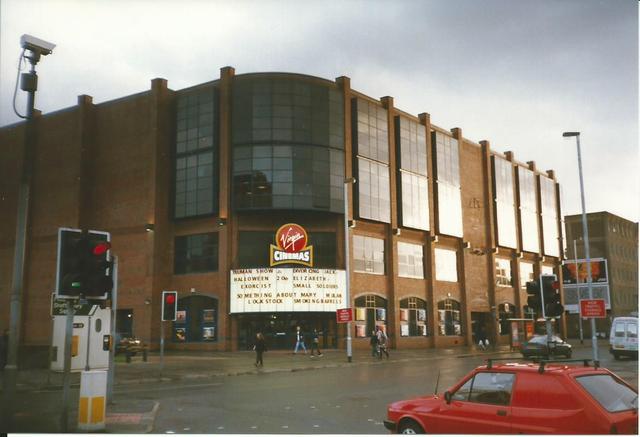 The 10-screen MGM opened on 15th July 1993. It is located in Belfast city centre. Taken over by Virgin on 4th July 1996, by February 2000 it was operated by UGC. In December 2003 it was taken over by local independent operator Movie House chain.

Seating capacities in the screens range from 436, down to 118. In February 2019 the building was acquired by a software company Kainos and it was planned that the cinema would close by the end of May 2019. This was deferred, initially to August, then through autumn & winter, until in February 2020, a ‘final’ date of Saturday 26th April 2020 was announced.

However this was pre-empted in mid-March, when Movie House, as with all other places of entertainment, was closed on government instruction, to help prevent the spread of the Coronavirus pandemic. On 17th March 2020, managing director Michael McAdam formally announced that the Movie House Dublin Road would not be re-opening once the national lockdown was lifted. It was demolished in May 2021.

The 10-screen MGM opened to the public on 15 July 1993, a preview event having been held the previous night. It was a replacement for the Cannon Film Centre (a 4-screen) in Fisherwick Place, approximately five minutes walking distance from the new cinema. Cannon had been acquired by Pathe Communications, who subsequently bought MGM. Seating capacity in the screens was listed as 436, 354, 272, 264, 262, 252, 187, 187, 169, 118. The cinema subsequently changed hands and its name on three separate occasions. On 4 July 1996 it became Virgin Cinemas. By February 2000 it had become part of UGC Cinemas; the first advertisement to carry the UGC name appeared in the press on 17 March 2000. In December 2003 it passed into local ownership for the first time, having been taken over by Movie House Cinemas; the first advertisement under the new regime appeared in the press on 23 December 2003.

It was announced on 12th February 2019 that the cinema would close by the end of May 2019. The building has been sold for more than £7m to Belfast-based software company Kainos, who plan to turn the site into its new headquarters.

Movie House managing director Michael McAdam said the decison had been made with “a heavy heart”. He also said that they had recently seen a big shift in attendance out of Belfast city centre to surburban cinemas, which offer free parking. He hoped to be in a position to offer jobs to the cinema’s 33 full and part-time staff.

In an update posted on their website today, Movie House Cinemas announced that their Dublin Road cinema (due to close this month) will remain open until the end of August at least.

In a statement posted on its website on 14 August 2019, Movie House Cinemas said that Dublin Road will remain open in the autumn and possibly well beyond. The update revealed that Movie House Cinemas didn’t have an exact date for the cinema’s closure but further information would be posted when this was known.

In a post published on their website today, Movie House Cinemas has confirmed that the cinema will close on Sunday 26 April 2020. Michael McAdam, Managing Director of Movie House, said: “It’s the end of an era on the Dublin Road and we want to thank all our customers and staff teams for their support over the years."