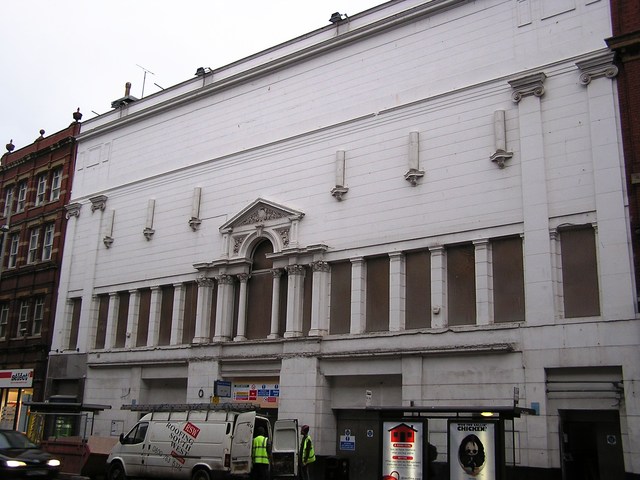 Originally opened as a music hall in 1892, it was known as the People’s Palace and was built for and operated by Horace Livermore. Livermore converted it into a full-time cinema from February 1912. From 1920 it was taken over by the Biocolour Picture Theatres circuit which became part of the Gaumont British Theatres circuit in November 1926. It was closed on 30th June 1927 and the auditorium was reconstructed behind the original facade.

It was re-named Gaumont Theatre in 1952 and the auditorium was modernised in around 1960. The Rank Organisation closed the Gaumont on 15th March 1980 and it was converted into a nightclub. It has undergone several name changes in this use and was last known as ‘Creation’ which closed in 2016. In September 2019 the inside of the auditorium was gutted for conversion into student accomodation. The facade of the building is Listed and has been retained.

A vintage photograph of the Gaumont from the 1960’s:
View link

scroll down for vintage photo of auditorium:
View link

Page 16 of brochure linked above.

Anyone know the screen dimensions for this cinema? I remember the screen as being huge, but then, I was much smaller when I used to go there as a kid. I was wondering how it compared to today’s multiplexes.

Large central cinema as I recall – saw many films in my youth ( 1970s ) and enjoyed its later incarnation as a nightclub ( Busby’s ) . Always enjoyed the junction between the local Bristolian accent and the term “Gaumont” which always sounded quite odd. Most recent use was as “The Sports Cafe” a sports themed huge bar hoping to catch in on the late 1990s sports craze , but that chain disappeared as quickly as it arrived .