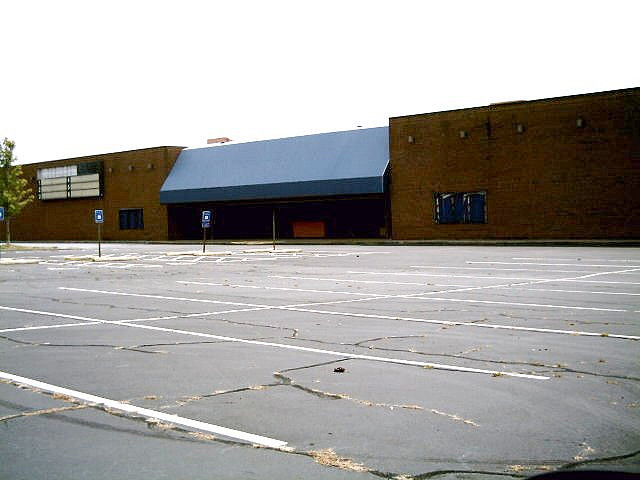 This 6-screen GCC opened in October 26, 1984 and was a transitional design, more modern than Perimeter Mall, but not what the Merchants Walk, Parkside or Hairston would look like. I don’t remember which one was first, but GCC and the Plitt Mall Corners opened about the same time. This location was like a set of triples backed up by a common lobby. The houses were about 400, 275, and 220 seats. One of the large houses was equipped with a Cinemeccanica V5 35/70mm projector and the rest were 35mm V8’s. I do not recall 70mm ever being run here.

This was a nice booth to work but I do not recall anything remarkable about its history.

Closed down along with the rest of GCC operations, except for the new Parkway Point in 2000. Like the Merchants Walk, Hairston and Parkside, this location was closed down when GCC declared bankruptcy, which allowed them to break the lease. It was demolished in January 2019.

So ive lived in the gwinnett place mall area for 30 years and remember going to see so many movies in this theater. How many summers i went to the kids summer movie specials in the 90’s. Movies like the first teenage mutant ninja turtles movie, land before time, neverending story, and the sandlot to name a few. Anyway im posting because a few weeks back there was a dumpster out in front of the theater and seeing as it has fallen into disrepair and all for sale signs have been long removed i figure they are getting ready to tear it down this year. I found a few papers floating around and took some pictures of them and posted them here. It made me very happy to find the summer movie listings.

Thanks for those pictures. They brought back a lot of memories. Based on the names of the managers listed under the logo for each theater, I can date the first Kiddie Camp flyer to 1985. I was at Northlake that summer and business was so busy that we used all three houses. Since Northlake was the only reel to reel GCC theater we were not able to interlock so we biked the reels from house to house starting shows every 30 minutes.

As for the movies themselves, Neverending Story was a big hit and I think we ran it every year. Annie was also very popular but it did not run as often because it was over 2 hours long. The bulk of the business for most of the theaters was from day care centers who would bring kids in by the bus load and more than 2 hours, especially at Northlake where the last show started at 11, caused them to get out too late.

Charlotte’s Web was another big hit. I think that the only thing that kept them from running it every year was print availability. Every projectionist dreaded the arrival of these prints, as well as the midnight show ones because the condition of the prints so poor. Sometimes it would take hours to inspect and repair a print and you had to do it since you were finished if you had a print break while running interlock especially at Akers Mill which had a very primitive, heavily modified interlock system. (Remember, this was in the day before the arrival of the polyester / mylar prints starting in 1996. Those were unbreakable which brought about its own set of problems, but that is another story.)Since GCC ran this program circuitwide, there were not always enough prints to go around even though they staggered the order and rotated the prints around the country.

The second Kiddie Show flyer is sometime after 1988 since it includes Hairston 8. Hairston was the citywide champ for kiddie show business. I worked there several times even after they did not use union operators regularly since the manager did not trust his staff projectionist to run it. They ran shows at 10, 12, and 2. At 10 we would interlock 7 of the eight houses, all the system would allow. At noon they would cancel the first show on four movies and run the kiddie show in the four large houses. At 2PM they would cancel another show of whatever adult movie they had and run it in the two big houses. All of this required a lot of print shifting and I think that my all time high was 17 print moves in one day before all of the regular movies were back where they belonged.

Like so much about this business, that was a time and experience that will never happen again.

my name is Justin and i worked at this theater from Spring of 1991 until probably mid-to-late summer of 1992. Lynn Zieburtz was the manager, Aaron worked the booth, and i think Lisa Cooper was the assistant manager who hired (and would later fire) me. one of the other female asst. managers was a lady named Dierdre, she had red hair and was super nice, i forget her last name, she came to a party that my friend threw that summer which i thought was cool (and also kinda odd since she was older than us, but whatever, we liked her). Silence of the Lambs was still playing when i was hired. we had Backdraft, City Slickers, The Rocketeer, Soapdish, V.I. Warshawksi, Doc Hollywood, Double Impact, Child’s Play 3, Other People’s Money, Billy Bathgate, Beauty and the Beast, Bugsy, The Hand That Rocks the Cradle, Memoirs of an Invisible Man, My Cousin Vinny, The Cutting Edge, Ladybugs, Thunderheart, Lethal Weapon 3, and Sister Act when i was there (i think—after i got fired, i immediately got hired over at the UA theater on the other side of Gwinnett Mall, and i’m a little fuzzy on the timeline so some of the movies we had kind of run together).

Lynn gave out “Z-bills” that you could save, and every couple of months, she would host an auction with old posters, standees, and other prizes to spend your bills on. it was great.

Aaron was the best; he would come down and hang out with you if you were closing, after he started the final show. he had this awesome recliner he sat in up in the booth, and he wore a fantastic pair of green slippers that he had cut the toes out of.

i forget the name of the male asst. manager who came later… Mr. Thornton maybe?? he drove a Grand Prix and was always trying to get people to ride with him when he went out to the bank or to get food. that always used to weird me out.

Other people who worked there when i did:

i can see other faces but the names are eluding me.

i’ve gone over there a few times over the years, hoping to sneak in and have a look around, but i quit trying a long time ago, it’s been sealed up tight for ages. the closest i got was finding one of the locks broken on one of the side exit doors, but the door was wedged shut and i couldn’t pull it open. plus it was in full view of the Fry’s parking lot and that spooked me a little. i’d be afraid to go in there now. i can’t believe no one ever did anything with the building, including just knocking it down. i still remember what it smelled like in that theater, it was very distinct, more than just popcorn, i’ve never been in another theater that smelled like it did.

thanks to everyone who posted photos and info about the theater and the people who worked there. it jogged a few nice, old memories.

This opened on October 26th, 1984. Grand opening ad in the photo section.

Closed in 2000 by General Cinemas and picked up by Georgia Theatre Company in 2001.

I just discovered this building(Cinema 6)while going to Frys electronics. I always enter Frys from the back, today I came through the front and saw the building. I’m a screenplay writer and involved in Independent film productions. Can anyone get me the present owners contact information? I will soon be starting a Christian Based nonprofit organization “Ntegrity Productions” and I’ve been praying for a build that I can convert into a production studio. Ages up to 18 will get free training in Film Production and in acting to include theater. Independent faith based and Family movies will be shown. I can be contacted at

Comments on the General Cinema Memories page on Facebook indicate that 18 years after it shut the doors, the building has recently been demolished. So, the timeline is roughly: Opened in the fall of 1984 Closed in mid 2000 Demolished in early 2019.

The building was never used again after GCC closed up shop and actually sat there empty longer than it was in operation. I worked the booth here from 1996-1999. When Aaron retired in 1997 and I worked it full time for a couple of years until the company cut back the union operator to Thursday and Friday, just enough to get the prints built up and shipped out. I regret to report that Aaron died shortly after he retired, about 2000. Jim Williams, the other operator who worked with Aaron until he left to open the booth at Hairston 8 died a couple of years ago at the age of 90.

Just now found this site and my old movie theater I worked at. Great find!

Wow, great to go down memory lane. I remember Aaron and Lynn vividly. I worked there from the summer of ‘95 until about '98 I believe. Worked so many Open to Closing shifts as a teenager trying to save money. When AMC Colonial 18 opened up Lawrenceville, that seemed to be the beginning of the end for this specific location. Oscar previously mentioned was my favorite manager. Braveheart was probably the biggest hit we had there while I was employed and I probably saw it 10 times LOL. Can’t wait to reminisce more with anyone else reviewing this thread.