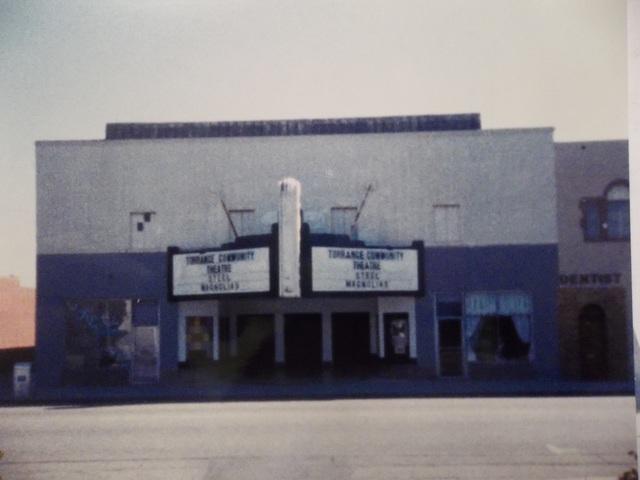 Opened in 1939, the Grand Theatre was a single screen movie house until its closure. It then became the Torrance Community Theatre. It was later demolished.

I attended the Grand and Stadium as a young kid in the early 1950’s. It was a drive through mostly un-occupied Torrance in those days, with hundreds of oil wells, from my house in Southwest Torrance. I am back in the old neighborhood. Later, as I got older, we kids usually went to the Fox Redondo and Strand. Later, still, we went on dates to the Torrance Drive-in. They are all gone now.

During the 1960’s, after the Grand closed as a movie theater and before it became a community theater for stage plays, it was a venue for teen age dances with live music. Bands such as the Midnighters performed there on Friday and Saturday nights.

I was involved with the “Hampton Players” when they moved into the Grand in 1969. We added tiered theatre seating, fixed up the exterior lights and box office, added lighting and sound, and opened our first production late in ‘69. We were in rehearsal and stopped to watch the first Apollo moon landing on a little b/w tv sitting on the set.

Lots of great memories – like wandering around the rafters in the attic while searching for the theatre ghost.

In 1963, the Grand was operated by Grand Theatres, Inc, 1653 Cravens Avenue in Torrance. President was Harry Milstein. Other Grand theaters at the time were the Stadium in Torrance and the Park in Gardena.

I saw a photo today of a Torrance Theater on Marcelina Avenue. Is this an unlisted Torrance theater?

Boxoffice of June 3, 1939, said that the Grand Theatre at Torrance had opened. The house was operated by Pacific States Theatres, a company controlled by Adolph Ramish and the Gore brothers.

The four other theaters known to have been built for Pacific States Theatres- the El Rey on Wilshire Boulevard, the San Clemente (Miriamar) in San Clemente, the La Mar in Manhattan Beach, and the Studio City in the San Fernando Valley- were all designed by architect Clifford Balch. Though I haven’t found any sources saying that Balch designed the Grand, I’d be very surprised if he didn’t.