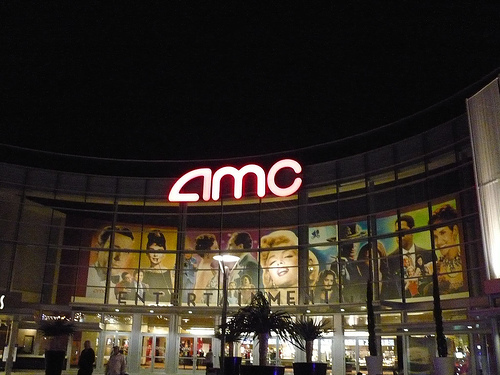 This theatre is located in the city of Torrance, not Los Angeles.

Very nice theatre, it’s one of the new super wide AMC builds. The only drawback is the “one size fits all” screen with top & bottom masking.

DON’T GO TO THIS THEATRE!!!! YOUR CHILDREN ARE NOT SAFE!!!! MANAGEMENT MAY BE ON DRUGS!!!

I was incredibly disappointed by the management at the AMC Del Amo Mall and will never return to the establishment. I went to see the Dark Knight at the AMC Del Amo Mall yesterday at midnight (7/18/08 at 12am) with friends. A young lady and her niece who was in line with me about an hour before the show sat in the row in front of me and laid their jackets over 3 seats to reserve the spots.

The lady went to get her friend and left her niece, who I later heard was 14, to keep the seats. Within a minute, 2 men and a woman (older teenagers maybe) came up to the young girl and ordered her to move. She said no and they began using profanities, picked up the jackets and threw them in the young girls face, the girl obviously scared got up from the seat. Just as she started to walk away her aunt and the aunt’s friend were walking up. They asked the teens (i think) why they cursed and threw the jackets at a child. The teens said there was no reserving seats and continued their horrible behavior.

What truly shocked me was the fact that the lady found 2 different managers to come over and talk to the teens, for a second, but they did nothing. I heard him tell the lady that he did not want to disturb the teens movie experience and offered her seats that were spread between 2 theatres. The teens were now being rewarded for acting like delinquents. Even though I said I saw what happened the manager (possibly on drugs) said it was her word against the teens and looked annoyed that she was even complaining.

When I say what management did was horrible I mean it. I would have walked out right then but the people I came with really wanted to see the movie. The worst manager’s names was Jesse, a very abrassive man who may have been able to help the situation if he was sober.

STAY AWAY FROM THIS THEATRE!!!!!

GO TO ROLLING HILLS AMC ITS DOWN THE STREET AND SAFER IF YOU CAN BELIEVE THAT!!!!!

Yikes. I hadn’t about that. Glad I missed it.

I go here semi-regularly. Never seen or heard of any horror stories like the one depicted above. It’s always safe when I’m here.

What story from the above post about a manager that couldn’t handle some teenagers.In my day,Lady I would have yanked those little boogers out of their seats and out an exit door,I realize i am talking about another time 70’s – early eighties when the Theatre business was for the most part run by folks that truly loved movies and movie theatres.Today'like so many jobs,A job!

As of now, I live less than 3 minutes away from this theatre. Perfect spot for me to host events for my film club on Friday nights. Place is still very clean and monitored well. I have witnessed ZERO incidents like the one described earlier. In fact, Torrance PD enforces a 10 PM curfew on teenyboppers at the theatre (and the Del Amo Mall itself).