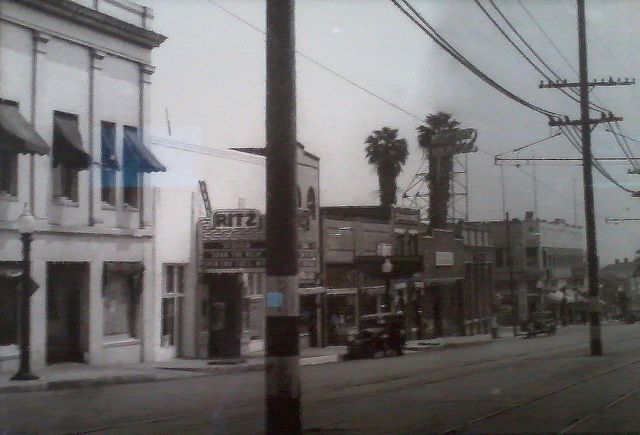 Although the nearby Rialto Theatre remains, the nearby Ritz Theatre has vanished after years as a district 2 Fox theatre. It was opened as the New Colonial Theatre on December 4, 1916 with Harry Carey in The Three Godfathers". Around 1930 it was equipped for sound movies and was renamed Colonial Theatre.

On March 14, 1936 it was taken over by Fox West Coast Theatres and renamed Ritz Theatre. On January 1, 1956 it was taken over by Edwards Cinemas. It was closed on March 31, 1957. It became a church until 1958. The building was damaged by a minor fire in 1962 and soon afterwards it was demolished.

When this theatre opened it was called the Colonial Theatre. Both the Colonial & Rialto theatre were operated in the early 30’s by Circle Theatres. In the mid 30’s Fox West Coast Theatres took over operations of both houses.

Here’s another interesting puzzle. Southwest Contractor & Manufacturer issue of September 2nd, 1916, contains an announcement that architect Edward J. Borgmeyer had completed plans for a moving picture theatre at South Pasadena for a Mr. Edward N. Jarecki. The estimated cost is given as $25,000.

The same publication, in its issue of September 23rd, the same year, announced that a brick structure, one story, 3 rooms, would be built at a cost of $8500 at 804-806 Fair Oaks Avenue, South Pasadena, for Ella M. Jerecki.

Despite the variant spellings Jarecki/Jerecki, they must have been the same family, but were both of these buildings built? Was the second, smaller building built next door to the theatre, at 806? I remember seeing the Ritz back in the early 1950s, and the building was obviously a very old one- certainly older than the Rialto. It must have been the theatre referred to in the article.

There is a big red brick building there now, I believe it houses office space and a Papa John’s Pizza on the first floor.Is this building part of the old theatre, or is this a newer retro type building?

The Ritz was demolished sometime in th elate 1950s or early 1960s. It was located in between an old brick building that was at the southeast corner of Fair Oaks and Hope, and Gus’s Barbecue which is still at its long time location, 808 Fair Oaks. The site of the Ritz became a parking lot. If there is currently a building at 804 Fair Oaks, it is new. You can glimpse the vacant lot in the picture on the main page of the web site for Gus’s:

Yeah, I was thinking of the building on the corner. The parking lot is there, where the Ritz used to be.

Sorry…it’s a red brick building with a white brick facade that is on the corner. I guess the Ritz would have been between that and Gus’s B-B-Q. I just came back from driving through Washington, Oregon, and Central California, and I took several pics of defunct theatres in mostly small towns, many in seedy and run-down areas.One town with two paticulary nice theatres was Lindsay, California. Every town in central CA has at least one theatre. Many have been turned into churches, storage areas or are just boarded up. In some cities, like Porterville, yuppies have moved in and are restoring the historic areas. In others, judging by the architecture and degree of decrepitude, they were probably by-passed by the railroad in the 20s and the theatres have been boarded-up since the 50s, just waiting for a rebirth at the hands of a dreamer, perhaps even someone who visits Cinema Treasures. You know,having spent years driving through California and the west I can say that without a doubt , there is no ugly or boring or uninspiring place around here.

Gus’s BBQ has been sold and is now being completely gutted inside and will be remodeled, said to open in February 2008. I wonder what it will look like.

SOUTH PASADENA – The Ritz Theater was held up last night by an armed bandit, who escaped with $53.10. Cashier Ruth Shroder and the doorman were threatened with a revolver.

The Ritz Theatre began as the New Colonial Theatre launching December 4, 1916 with Harry Carey in “The Three Godfathers” supported by the Ramona Players vaudeville led by comedian Harry Hahn. It was then called simply the Colonial Theatre and was equipped with sound to remain viable.

Under Fox West Coast, the venue was given a major refresh and relaunched as the Ritz Theatre on March 14, 1936 with a great program of “Seven Keys to Baldpate,” “If a you Could Only Cook” and a live radio episode of “Calling All Cars” on the Ritz stage.

Edwards Theatres took on the aging venue with a grand reopening on January 1, 1956 now equipped with widescreen projection to present CinemaScope theaters. The “new” Ritz opened with Victor Mature in “Chief Crazy Horse.” But the circuit found out that audiences were more interested in television. They closed the Ritz likely at end of a leasing term after exploitation film screenings of “Mom and Dad” on March 28-31, 1957 with Elliot Forbes on the stage. Shockingly, the theater reported sell-out audiences throughout its final weekend - an oddity for a faded movie theater of the 1950s.

The theatre was soon retrofitted as a church which was operational for the remainder of 1957 and for 1958. The building suffered a minor fire in 1962. However, that appears to be the impetus to remove the building as it was demolished not long after.