Friends of the Rialto (Official) 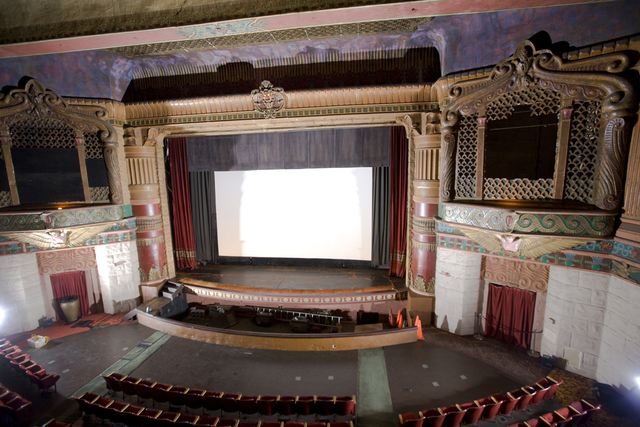 Located five blocks south of the 110 freeway, on Fair Oaks Avenue in South Pasadena. The Rialto Theatre opened for vaudeville and movies on October 17, 1925, with Ray Metcalfe playing the 2 manual, 10 rank Wurlitzer pipe organ and with the Rialto Orchestra accompanying the world premiere of Universal’s “What Happened to Jones” starring Reginald Denny. A Franchon and Marco stage show included trapeze artists and vaudeville acts. Admission was 30 cents. The Rialto Theatre was one of the last theatres to be designed by noted theatre architect Lewis Arthur Smith. It is decorated in a mix of several styles, mainly Moorish, but there are elements of Egyptian, Spanish Baroque and Classical features too, all contributing to the Jazz Age charm of this theatre.

The Rialto Theatre was built by local showman C.L. Langley, who had built and operated the Alexander (Alex) Theatre, Glendale in the previous month. South Pasadena had one other theatre, the Ritz Theatre (opened as the Colonial Theatre), nearby at 804 Fair Oaks Avenue, but demolished by the 1960’s.

Original seating for the Rialto Theatre was about 1,200 including a balcony. The auditorium has a colorful stenciling, plaster ornamentation, and organ chambers supported by mythical creatures called harpies. A gargoyle sits high above the proscenium with red glowing eyes that illuminate even during film shows.

In the 1960’s it was leased to Mann Theatres and legendary organ concerts were given by George Wright during this time. The grille on the left organ chamber was damaged when the fire department aimed lots of water at it, to put out a fire that resulted in the removal of the pipe organ.

In 1977, South Pasadena citizens circulated petitions to save the Rialto Theatre from demolition to create a parking lot. The Rialto Theatre was designated a local listing of Historic Cultural Monument in 1977. It was added to the National Register of Historic Places in 1978.

Succeeding Mann as movie operators, Landmark Theatres took over in 1976 and showed arthouse and classic movies here. In the 1990’s many moviegoers were alarmed at Landmark’s plan to multiplex the interior.

The Rialto Theatre, including its interior, has itself starred in many movies and commercials. The back alley of the Rialto was used in the Robert Altman film “The Player” (1992) during the murder scene. “Scream 2” (1997) also featured the theatre. The theatre has a display of historic memorabilia in the lobby. Gorgeous photographs of its auditorium are included in the 1997 book “The Last Remaining Seats, Movie Palaces of Tinseltown”.

Landmark celebrated the 75th Anniversary with a birthday bash on Friday, October 27, 2000, with a large cake, vaudeville, opera, Shakespeare and a showing of the Marx Bros. classic “Duck Soup”. Additional celebrations in October and November of that year included a new print of Tim Burton’s “Nightmare Before Christmas”, a one week classic film festival (Casablanca", “The Wizard of Oz”, “Gone With the Wind”, “Once Upon a Time in the West” and “Citizen Kane”) and one week of ‘Los Angeles in the Movies’ (Sunset Boulevard", “Singing in the Rain”, “Double Indemnity” and “Shampoo”).

Landmark closed the Rialto Theatre with “The Simpson Movie” on August 19, 2007. Then, on December 29, 2007, a farewell performance of “The Rocky Horror Picture Show” was held, concluding three decades of the cult favorite being presented at the theatre as a midnight feature. It was ordered closed by the city in March 2010 because of code deficiencies.

Located near Mission Street, which has coffee houses, antique stores and restaurants, the Rialto Theatre has long been the heart of South Pasadena. Like all old theatres, this one now needs new seats and carpet, revamped heating and air conditioning, and repainting to its original paint scheme. In “Sunset Boulevard”, former silent movie star Norma Desmond, played by Gloria Swanson, could not resurrect her career, but this silent era gem can be refurbished and reopened like so many historic theatres that have been restored and reopened nationwide. For the Rialto Theatre to be demolished would be a heartbreaking loss for South Pasadena and for the Los Angeles region. Whether for movies, live events or both, the community must rally to save the theatre yet again.

In January 2016, the Los Angeles Times reported that the Rialto Theatre was purchased by well-known LA developer Izek Shamof who hopes to reopen the Rialto Theatre as an entertainment venue, perhaps including a bar and showing classic movies. In April 2017 it was announced that Mosaic Church on Hollywood Boulevard, Los Angeles, signed a lease on the building.

Looks like the filming of Modern Family caught the locals by surprise.

Actually, that was LA Magazine’s “spin” on it! I posted the pictures on my Facebook site and Chris Nichols asked to use them in exchange for giving Friends of the Rialto credit. He made most of the details up. There was no “panic” or “racing to the scene”, I was the one who was originally contacted by Modern Family and I put them in touch with the owners! The TV crew was very friendly and loved the Rialto, and I think the show was sweet. Here is a link to watch the epson online: http://abc.go.com/shows/modern-family/episode-guide/season-06/623-crying-out-loud

With the support of the Rialto’s new owners, Friends of the Rialto has now produced 2 fundraising shows and are in rehearsals for a fully staged production of Funny Girl with full orchestra. We also have an online fundraising campaign with the goal of bringing in enough in cash and pledges to take on the lease and restore and reopen the Rialto. Please visit my website for information on upcoming events, and a link to the fundraiser. We have lots of fun “perks” too!

We also did a community work day, getting rid of a lot of junk (don’t worry, nothing cool or vintage!). The goal was to open up space on stage to make it easier to produce our shows! Another work day will be scheduled soon, you can get on my mailing lists on the website too!

The latest news on the Rialto Theatre is that the owners signed a lease with Mosaic Church. They have exclusive rights to use the entire building, My group, Friends of the Rialto, has been holding special events in the Rialto for the last 2 years with the owner’s support. We have presented a proposal to the church leaders to manage and program the Theatre whenever the church is not using it. We believe this is the best use of the theatre and will help bring the community together. For the latest, sign up on our mailing list at www.FriendsoftheRialto.org.

Watching a horror movie called “Nightmare Cinema” on Shudder & the Rialto is featured prominently (at least the exterior). Looks beautiful & haunting at the same time.

Thanks Jorge! Yes, I was there for the 3 day shoot, they did exteriors and interiors. They even shot in the projection room which is a first for the Rialto! Mick Garris, the writer/director, was really great, he actually visited the Rialto a lot when he was younger and wrote the script with it in mind, having no idea that he would be able to shoot there! For those interested, here is a link to some behind the scenes photos I shot during filming of Nightmare Cinema: https://www.facebook.com/pg/FriendsoftheRialto/photos/?tab=album&album_id=2558787384140105

On March 10, 2021 at 7pm I will be doing a free online presentation on the history of the Rialto, leading right up to the recent exterior restoration that the owners did over the last year. I consulted with them to make sure authentic colors and materials were utilized. The presentation will include exclusive behind the scenes photos of the process as well as historic interior photos of non-public areas. You can register here: www.crowdcast.io/e/rialto

October 17, 1925 - The Rialto Theater in South Pasadena opened. The Rialto Orchestra under the leadership of Rhuel Eno Moulton provided musical accompaniment for the “five snappy acts” of vaudeville Director William A. Seiter and Star Reginald Denny were in attendance. The theater closed in 2007. Featured in the film “La La Land,” it is now used by a church group.