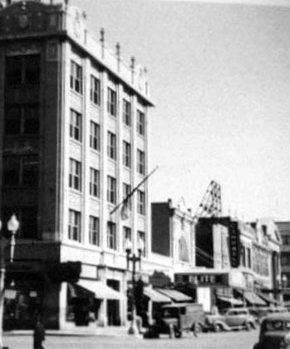 Here is a photo with a picture of the Elite Theater.

Here is a March 1937 ad from the Appleton Post-Crescent:
http://tinyurl.com/yfp3ruy

An issue of Engineering News Record from March, 1921, had this item about plans for a new theater on College Avenue:

.If the Elite was indeed designed by Henry Wildhagen, it was one of his later works. He was born in 1856, and by the late 19th century had become one of northern Wisconsin’s leading architects. Many of the buildings he designed are listed on the NRHP.

Neil Duffy opened the first Elite Theatre (probably the house at 101 College Avenue) in Appleton in 1908, according to The Fox Heritage: A History of Wisconsin’s Fox Cities, by Ellen Kort. It was the first movie theater in the Fox River Valley.

It appears that the second Elite Theatre operated for less than thirty years. The headline of a story in the May 15, 1950, issue of the Appleton Post Crescent read “Curtain to ring down Tuesday on last picture in Elite Theater.”

From what I have been able research on line, the Elite Theater likely closed due it being sold to what was then Aid Associations for Lutherans (a life insurance fraternal benefits company) to make way for a new 10-story addition to its home office.

Construction of the former Aid Association for Lutherans Building, now called the 222 Building, was indeed completed in 1952. The Elite Theatre was one of the buildings demolished to make way for the project.