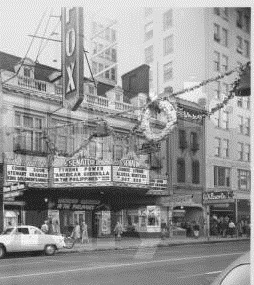 The Senator Theatre was opened on September 29, 1924 with Norma Talmadge in “The Only Woman”. It was operated by West Coast Theatres and was created from two earlier theatres, a large one on L Street and a smaller theatre on K Street. It was soon renamed Fox Senate Theatre. From 1962 it was renamed Fox Theatre. It was demolished in the 1970’s.

Growing up in the sixties, I remember the Fox as the Theatre that featured all the great Disney movies of the decade, most notably Mary Poppins, Lt. Robin Crusoe, The Ugly Dachsund, Blackbeard’s Ghost, and The Love Bug.

I also remember MASH playing there in 1970.

Right next to the front entrance was a carmel corn shop.

I will be posting some great photos of both the exterior and interior of the Theatre as soon as the site is able to accept them. Check back or email me for a look.

My father Elmer Thomas Davis worked for the Senator Theater From July 1929 to October 1932. At that time all the first run theaters had one or more full time artists that produced beautiful posters of the upcoming attractions. They also created other lobby displays appropriate for the movie of the day. My father was a talented artist and worked for a number of theaters in this capacity in San Francisco, Sacramento, and Cleveland in the thirties. He was known as a lobby display man (per the union). I wonder what happened to all these wonderful posters that were made during this time?

continued: In addition to painting wonderful huge posters of the old silent stars and the new talkies these artists had to be excellent lettering men. All the posters were hand lettered with the stars names, the movie title, the co-stars, the directors, etc. This was a special talent my dad worked hard to perfect.

Responding to your previous comment about the Sacramento Fox Senator looking like two different buildings in the photos –
They actually were two different buildings. The photo from 1925 is of the back wall of the auditorium, on the North side of L Street between 9th and 10th Streets. The 1953 photo is of the main entrance on K Street. The 1st floor had a long narrrow entry lobby leading to stairs which were in a connection over the alley, leading to the auditorium on the other side. From inside, it appeared seamless. The Trianon Ball Room was located on the 2nd floor of the K Street building. It is all that is left today, converted to office space, after being a Burger King in the 80’s! Very sad.

Leonard F. Starks was involved in the project that eventually became the Fox Senator Theatre at least three years before the house opened. When the project was announced in the June 29, 1921, issue of the trade publication Engineering and Contracting, it was to be called the Paramount Theatre, and Starks was already the lead architect. Though a native of California, Starks had been working for some time in New York City in the office of theater architect Thomas Lamb.

This thumbnail biography of Leonard Starks from the Historic Fresno web site doesn’t mention the Paramount specifically, but tells of the intention of the Famous Players corporation to build a chain of theaters on the west coast. The proposed Paramount was undoubtedly one of these. Famous Players had contracted with Lamb’s office for architectural services, and Starks was to return to California to oversee design and construction. When the plans for the chain fell through, Starks resigned from Lamb’s firm and set up his own practice in Sacramento.

Starks' partnership with E. C. Hemmings was formed in 1923, and Hemmings died the following year. The Senator Theatre might have been their only major project together.

During the time I lived in Sacramento 1962-1965 the Fox (Senator) was my favorite theatre. I even liked it better than the Alhambra. It was in beautiful shape and film presentation was superb.

Personally I think it would have been much more practical to save the Fox than the Alhambra just because of it’s much better downtown location for a mixed use venue. Of course both theatres, our only real Sacramento movie palaces, were ultimately demolished and that’s doubly sad!

I am wondering if anyone knows or has pictures of the ballroom above the fox theater. It was called Palm Grove Ballroom. Please let me know you you have or know where to see pictures. thanks Loved the fox used to go there

As a kid, I always wondered where that door went to. But my mind and nose always went to the KarmelKorn place…God…fresh, hot, and you could take it into the Fox… I also remember in the late 50s for three Pepsi Cola bottle caps, gave you entrance to the Saturday Morning kids movies. I won a transistor radio with my ticket number.

Kimberly, I found one in the old Sac Union archives yesterday. If you still need it, let me know. Kathy